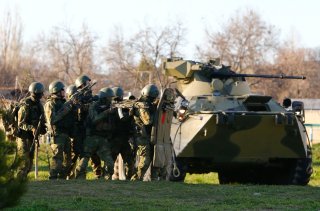 As Russian forces consolidate their control over Severodonetsk, Ukrainian troops continue to hold out inside a chemical plant within the city.

Russian-backed separatist forces announced on Thursday that they will re-open a humanitarian corridor leading out of the Azot chemical plant in Severodonetsk. Mikhail Mizintsev, chief of Russia’s National Defense Management Center, said earlier this week that prior attempts to evacuate the roughly 500-1,200 civilians sheltering inside the plant failed due to ceasefire violations committed by Ukrainian troops. “Militants used the humanitarian pause to regroup to more advantageous positions and restore fighting capacity, using civilians as human shields,” Mizintsev said. Kyiv has previously denied Russia’s claims that it is sabotaging evacuations and using civilians as human shields. The United Nations has expressed concerns over a growing lack of access to water and poor sanitary conditions for the civilians trapped inside the war-ravaged city.

Leonid Pasechnik, head of the pro-Russian breakaway Luhansk People’s Republic (LPR), said LPR forces have entered the Azot plant’s territory but have so far proven unable to dislodge the Ukrainian forces embedded in the facility. LPR officials previously estimated that up to 2,500 Ukrainian troops were holed up in the Azot plant, including as many as 500 “foreign mercenaries.”

The ongoing Azot standoff is reminiscent of the earlier Azovstal siege in the eastern port city of Mariupol; thousands of Ukrainian troops took up fortified positions at the Azovstal metal plant in  Mariupol’s industrial zone and continued to resist the invading Russian forces from inside the facility for months before surrendering in late May.

Russian forces stormed Severodonetsk—one of the last remaining Ukrainian strongholds in the eastern Luhansk region—in May after advancing on the city from three directions in an attempt to encircle the large pocket of Ukrainian troops located between Severodonetsk and the neighboring city of Lysychansk. Severodonetsk’s residential areas fell under Russian control after weeks of heavy fighting, prompting some of the city’s defenders to withdraw to the city’s industrial zones. Eduard Basurin, an official of the pro-Russian separatist Donetsk People’s Republic (DPR), claimed this week that Severodonetsk has been completely blocked off by Russian forces, telling Ukrainian forces inside the city to “surrender, or die.”

Russian-aligned officials say the brunt of the fighting has shifted to Lysychansk, where Russian forces are attempting to execute a similar strategy of massed artillery strikes followed by encirclement maneuvers.