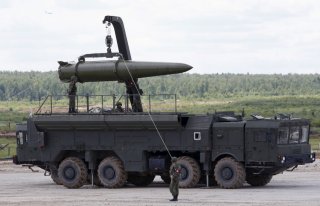 The Russian military has confirmed its Wednesday strike against the Chaplyne railway station in Central Ukraine’s Dnipropetrovsk region.

“As the result of a direct hit by an Iskander missile against a military echelon at the Chaplino (“Chaplyne” in Ukrainian) railway station in the Dnipropetrovsk region, more than 200 servicemen of the reserve of the Armed Forces of Ukraine and ten units of military equipment, en route to the combat zone in Donbass, were destroyed,” said Russian Defense Ministry spokesman Lt. Gen Igor Konashenkov during his regular briefing on the state of the Russian military campaign in Ukraine. Konashenkov added that eight Ukrainian aircraft—including three Su-27 fighters and two Su-24 attack aircraft—were destroyed in Russian strikes in the Poltava and Dnipropetrovsk regions. These losses, which have not been verified, would mark one of the most significant battlefield setbacks for Ukraine’s Air Force to date.

Ukrainian authorities said twenty-two civilians were killed and another fifty were injured during the railway station attack. “Chaplyne is our pain today. We will definitely make the occupiers bear responsibility for everything they have done. And we will certainly drive the invaders out of our land,” Ukrainian president Volodymyr Zelenskyy said during his evening address. The attack set fire to five train carriages and damaged several nearby residential buildings, according to officials. “An 11-year-old boy died underneath the wreckage of a home, and another 6-year-old child died in a fire in a car near the railway station,” read a statement by Ukrainian presidential aide Kyrylo Tymoshenko. “Terrorist Russia keeps killing Ukrainian civilians,” tweeted Ukrainian foreign minister Dmytro Kuleba. “Russia must be stopped now before it kills more people in Ukraine and beyond.” Kyiv made no mention of any Ukrainian military losses resulting from the Chaplyne strike.

Zelenskyy warned last week that the Russian military “could try to do something particularly disgusting, particularly cruel” on August 24 to upend Independence Day, a Ukrainian public holiday commemorating the country’s 1991 declaration of independence from the Soviet Union. There is no clear indication that the Chaplyne strike, which is consistent with Russia’s long-established strategy of targeting railway junctions to disrupt Ukrainian supply routes, was inspired by or is in any way connected to Independence Day in Ukraine.

The Kremlin has denied deliberately targeting civilians in Ukraine, with Russian defense minister Sergei Shoigu claiming on Wednesday that the Russian military slowed the pace of its offensives in Ukraine to minimize civilian casualties. Neither Russian nor Ukrainian accounts of the Chaplyne strike have been independently corroborated.