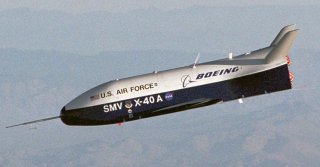 Last year a Chinese company announced it was working on a reusable space plane that could be launched from the wing of a larger “mothership” aircraft. After being jettisoned from the larger vehicle, a single rocket engine would boost the space plane into low orbit. While not much more is known about the project, the idea of a reusable “space plane” is far from new.

It was a concept first envisioned by the United States Air Force in the 1950s, and this included the Boeing X-20 Dyna Soar (Dynamic Soarer) program, which was the first to develop a craft that could be used for a variety of military and reconnaissance missions.

That program was canceled before it had gotten very far, but subsequent efforts have taken the concept much further. This includes the highly secretive X-37B, which as The National Interest previously reported is now under the direction of the United States Space Force, the sixth and newest branch of the U.S. military.

However, the reusable X-37B Orbital Test Vehicle (OTV) still remains essentially a giant mystery, even as a “mini Space Shuttle” like craft continues to be used in a variety of missions, including the latest, which could last up to two years! Despite high profile launches, the Air Force and Space Force has actually said very little about the craft—but some details can be gleaned from the X-40A, the prototype that led to the X-37B’s development.

The unmanned and unpowered Boeing X-40A was actually the first-phase flight test vehicle for the U.S. Air Force’s Space Maneuver Vehicle program to develop a small, reusable but highly maneuverable spacecraft and for deploying satellites and conducting surveillance and logistic missions.

The program began in the late 1990s and the unpiloted X-40A was built by Boeing’s Phantom Works facility to around 80 percent scale of the future X-37. It was meant to test the aerodynamics and navigation of the Reusable Launch Vehicle program and the first drop test was conducted in August 1998 when a helicopter lifted it to about 10,000 feet above Holloman Air Force Base, New Mexico and released. The aircraft made an unpowered flight that demonstrated its guidance, navigation and control capabilities.

After that flight the Air Force loaned the aircraft to National Aeronautics and Space Administration (NASA), which conducted seven additional approach and landing tests at NASA Dryden in 2001 to further assess its systems. An Army CH-47D Chinook released the aircraft from an altitude of 15,000 feet and the craft flew in an autonomously controlled descent for 75 seconds and then landed on the main runway at Edwards Air Force Base.

The program successfully demonstrated the glide capabilities of the later X-37’s fat-bodied, short wing design, while it also validated the proposed guidance system for the OTV.

The one and only X-40A test vehicle is now on display in the Space Gallery at the National Museum of the United States Air Force in Dayton, Ohio.