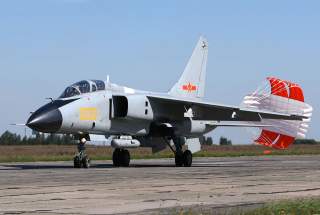 On August 8, Chinese media reported that the People’s Liberation Army Air Force had unveiled a new variant of its JH-7A maritime strike jet at the Russian Aviadarts aviation competition. The new model, called the JH-7AII, was not visibly different from the base model, but is believed to possess improved radar and cockpit avionics.

The JH-7 “Flying Leopard”—codenamed “Flounder” by NATO—is an old-school design conceived before the advent of stealth technology. The bomber manufacturer Xi’an Aircraft Industrial Corporation began working on a two-seat supersonic H-7 bomber in the early 1970s inspired by the fast and powerful American F-111 Aardvark.

Over time, the concept was reworked into a fast-anti-ship fighter bomber, (resulting in the “JH” designation), with a pilot and weapons systems officer seated in a tandem arrangement. The resulting jet—the first in China designed using computer software— somewhat resembled an enlarged version of European Tornado and Jaguar attack jets.

The Flying Leopards made its first flight in 1988, and a small number of pre-production aircraft entered service with the PLA in the early 1990s. However, It wasn’t until 2004, however, that an improved JH-7A full-scale production model enter service and China had mastered license-production of the WS-9. The new JH-7A boasted additional hardpoints, lighter composite structure, a JL-10A Condor pulse-doppler multimode radars, and modernized avionics including two LCD cockpit displays. The radar reportedly is used to give the JH-7A low-altitude terrain-following capability similar to that on the F-111.

Out of 270 JH-7s built, around 215 to 240 JH-7As remain in service today split evenly between the PLA Naval Air Force and PLA Air Force. The jets have frequently deployed abroad for joint exercises with Russia.

Twelve JH-7s have been lost in accidents since 1991, including one that infamously crashed into a ball of fire at a Shanghai airshow in 2011 and two in 2019: On March 12, a JH-7A experienced a mishap during a low-altitude training flight over Hainan island. Reportedly, Lt. Col. Ren Yangtao delayed ejecting to avoid crashing into a densely populated residential area, and he and a back-seater perished when their plane hit a water tower. A second JH-7A crashed on May 18 in Shandong province, but this time both crew members safely ejected.

The Flying Leopards have a combat radius ranging from 800-mile combat radius on internal fuel to 1,100 miles with external tanks. For armament, it has an internal twin-barrel GsH-23 cannon and can mount over seven tons of bombs, missiles and rocket pods. It can also mount an under-fuselage laser targeting pod to direct laser guided bombs carried underwing.

The JH-7 can also defend itself from enemy fighters to a limited degree with short-range PL-5 and PL-8 heat-seeking air-to-air missiles (based on the U.S. Sidewinder and Israeli Python III respectively) carried on its wingtips, which can be interfaced with a helmet-mounted sight on the JH-7A model. The Flying Leopard might also potentially carry long-range radar-guided PL-11 or -12 air-to-air missiles underwing as these are reportedly compatible with its radar.

However, thought capable of sprinting to up to nearly twice the speed of sound at Mach 1.75 using its afterburners, the JH-7 is undoubtedly indiscrete on radar and would struggle to survive interception from modern fighters and the Aegis air defense system used on warships operated by the United States and its allies.

How, the Flying Leopard has two cards it can play to carry its weight in modern warfare. The first comes in the form of the four KD-88 or YJ-83 subsonic anti-ship missiles it can carry underwing that can attack ships over 100 miles away, using an active radar-seeker to home in on the terminal phase. This means it doesn’t have to penetrate too deep into an air defense umbrella to accomplish its mission.

The second lies in the use of powerful KG600 jamming pods to suppress the radars on board enemy warships, decreasing detection range and accuracy. These could not only help a JH-7 evade interception, but increase the likelihood of its missiles piercing the multiple layers of defenses possessed by modern warships.

The jamming pods are often coupled with LD-10 and YJ-91 anti-radiation missile designed to home in on radars from up to sixty miles away, making such jets a nasty threat for air-defense vessels. Some JH-7s have also been seen carrying sensor pods designed to spy on enemy signals (ELINT).

The PLANAF also operates J-16D and carrier-based J-15D electronic attack fighters which could team up with Flying Leopard to enable such attacks.

A Next Generation Flying Leopard?

Long-range missiles only work if their long-range sensors that can “see” targets from far away—and that can also see through the interference of a JH-7’s own jammers.

This may explain why Jane’s reports that the JH-7AII upgrade may be principally focused on improving the radars computerized post-processing to achieve better integration with the jammer.

The jammers themselves may have been updated to a more powerful KG800 model pictured here.

There is some suspicion how substantial this update is, due to a lack of prior publicity. In the early 2010s, there was talk of an improved JH-7B variant which never materialized. The Flying Leopard has also been offered for export as the FBC-1, and in 2018 as the JH-7E—without any takers.

However, proposed upgrades for the aforementioned aircraft may wind their way to the JH-7, such as improved WS-9A turbofans generating roughly 10-15 percent more thrust. Another useful upgrade would be inflight-refueling capability, which would greatly increase the JH-7s range.

China has also been developing a supersonic YJ-12 anti-ship missile, which it claims the JH-7 will carry. This would prove much more difficult to defend against than the YJ-83, as it would be able to race up to four times the speed of sound and attack vessels up to 250 miles away.

However, while the YJ-12 has been tested on an H-6 bomber and deployed on firing platforms on the Spratly Islands, there have yet to be photos of any mounted on Flying Leopards.

Despite seeming old-fashioned compared to modern strike jets like China’s Su-30MKK Flanker-G maritime strike fighters, the Flying Leopard’s ability to dart quickly into range to launch powerful long-range weapons means it still poses a threat. As confrontations between Chinese aircraft and the warships of other navies in the Pacific increase in frequency, aircraft like the JH-7 would seem to have a place in China’s security strategy.

It will therefore be interesting to see if China continues to modernize the beefy maritime strike jet, or retires it early to shift resources to more modern designs like the J-16 Red Eagle, the forthcoming H-20 stealth bomber, or even the rumored JH-XX regional stealth bomber. News of the latest upgrade suggests China might still see a use for its Flying Leopards.