Does the U.S. Navy Have Another Carrier-Killer Missile to Worry About? 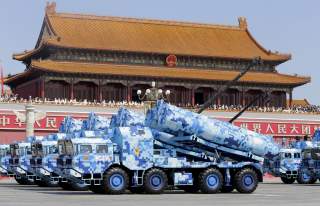 An image has surfaced of what appears to be China’s YJ-12 missile being fired from a transporter erector launcher (TEL), confirming prior reports of the missile’s land-based variant.

The YJ-12 was introduced in 2015 as an air-to-surface, anti-ship cruise missile, tested and prominently displayed on the Xian H-6 bomber. The YJ-12 offers compatibility with the newer Xian JH-7-- other prospective fittings include the J-10 and J-11. The H-6 carries up to four YJ-12 missiles, as opposed to the two of the JH-7. As previously reported by several defense observers, the YJ-12 bears design similarities to the Russian Kh-31P air-to-surface missile.

Possessing a maximum speed of Mach 4 or 4,900 km, the YJ-12 is designed to effectively target and destroy aircraft carriers. It should be able to outrange Aegis Combat Systems and SM-2 defense missiles, rendering it a potent potential threat to US carrier strike groups in the South China Sea. The YJ-12 can further reduce its chances of being intercepted with circular defensive maneuvers.

It was discovered after the unveiling of the original YJ-12 that it would be accompanied by surface and land-based variants, the YJ-12A and YJ-12B respectively. Given the performance and design overlap between the two, it seems likely that the YJ-12B is an enhanced version of the 12A that could feature a greater maximum effective range than the 400 km of the original. It remains to be seen if added counter-countermeasures against missile defense systems will make into the YJ-12B’s upgrade suite.

Deployment details on the YJ-12B were scarce until mid-2018, when CNBC News cited US intelligence sources to report that China had stationed YJ-12B-equipped launchers on several reefs in disputed areas off its Southern coast. The move garnered severe disapproval from the White House: "We're well aware of China's militarization of the South China Sea...there will be near-term and long-term consequences," said White House Press Secretary Sarah Huckabee Sanders.

Aside from its significant military impact in conflict zones, the YJ-12 aptly illustrates China’s aggressive export strategy for many of its flagship missiles. The YJ-12 has two export versions produced in 2016-- the CM-302 and CM-400AKG. The CM-302 appears to be a multi-purpose, air-sea-land weapon.

While India is out of the question as a prospective buyer due to its ongoing BrahMos missile project with Russia, China has actively marketed the CM-302 to Pakistan over the past several years. It should be noted that the YJ-12’s export versions have been tuned down to a range of up to 250 km, in compliance with the Missile Technology Control Regime (MTCR). China has had previous success in the missile export market, selling its medium-range DF-21 missiles to Saudi Arabia in 2007 and short-range SY-400 ballistic missiles to Qatar in 2017.

The YJ-12 is a potent anti-ship weapon that helps China to more effectively enforce a perimeter around the disputed South China Sea zone, raising the operational risks of American forces present in the area. The deployment of this missile comes at a time of western strategic anxiety about dwindling American capabilities in the face of rapid Chinese and Russian investment into hypersonic missile development, as outlined by a recent National Defense Strategy Commission (NDSC) report.