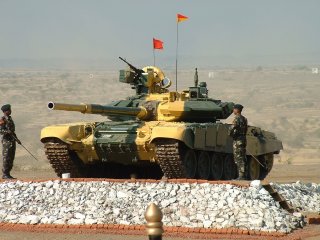 India’s foray into more advanced Russian tank design focuses on tailoring a Russian design to Indian requirements and a simple, domestically manufactured parts-acquisition process. Improvement in armor and targeting give the Bhishma an edge.

Back in the early 2000s, India bought several hundred T-90 tanks from Russia and has since grown a formidable collection of actually quite capable armor.

The Russian T-90s, while quite capable on their own, (actually just plain tough) were a strategic decision for India. India fields a fairly extensive fleet of domestically build T-72s. These T-72s shares a number of components in common with the T-90 platform (possibly as high as 60%), which would, in theory, simplify logistics and repairs.

India’s T-90M Bhishma — named after a character in Mahabharata epic— sports French-built thermal sights, and Russian Kotakt-5 explosive reactive armor (ERA). Its turret also has domestically developed composite armor, a mixture of ceramic and other laminates, which may offer better protection than the stock T-90S, the Russian export model.

Although India fields a domestically designed and manufactured tank, the Arjun, the platform has been set back by production delays, which spurred purchases of the T-90.

There are advantages to the T-90 platform, domestically produced or not.

One of the T-90 variants, the T-90MS is reportedly ideal for the cold, harsh conditions of Ladakh, Sikkim, and Arunachal Pradesh in far north and eastern regions. In contrast, the native Arjun thrives on India’s plains, which can be extremely hot, and was reportedly a challenge for the T-90s, presumably due to overheating.

The Indian-built T-90s are also reportedly less reliable than their Russian-produced counterparts, perhaps one of the factors that contributed to their problematic record on India’s plains.

Most recently, the Indian Ministry of Defense awarded a contract worth 2.8 billion U.S. dollars to a domestic manufacturer to build 464 license-built T90S tanks for the Indian Army.

Domestic production of a signature goal of India’s defense industry, which despite importing much foreign tech, strives for at least domestic assembly, if not complete home-grown manufacturing.

…With a Russian Twist

Still, Russian-derived technology is heavily integrated into India’s armored corps. An expert with The Diplomat reported that “Russia delivered the first T-90S MBTs to India in January 2004. There are currently around 1,000-1,100 T-90 MBTs of both the MS and Bhishma S variants in service, although the operational readiness rate of the tanks remains unclear. According to one estimate, 850-900 are of the T-90S Bhishma variant. Of the two, the T-90MS MBT is the more advanced design.”

There was even speculation in Russian state-owned media channels that India has shown an interest in Russia’s newest tank design, the T-14 Armata, either as an import, a domestically-built licensed copy or simply as a model on which to base yet another home-grown tank platform.

If this is more than just a rumor remains to be seen — what is sure is that Russian armor in India’s inventories likely won’t disappear anytime soon.