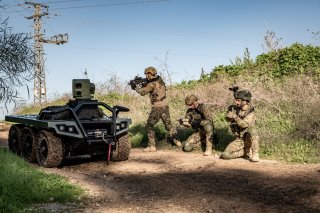 Israel has been experimenting with unmanned vehicles for years and they are finally getting their day in the sun as more unmanned platforms play a role on land. The latest Israeli innovation in this sector is called Rook, a multi-payload six-wheeled unmanned ground vehicle from Elbit Systems and Roboteam.

Announced on November 16, the Rook launch adds a new platform to the rapidly expanding number of Unmanned Ground Vehicles (UGVs). Its makers say it “features unique design and built-in autonomy suite offering a combination of greater capacity, improved maneuverability and must-have on-field agility that are key for greater mission effectiveness.”

Like other platforms in this space, it is a small and versatile vehicle that can be used on different types of missions. According to photos of its various roles, it can carry soldiers, such as a wounded person from a battlefield, it can have a mounted gun on it, as well as be used as a kind of mothership to launch small drones, or help with surveillance. “The RookUGV was developed based on the operational experience accumulated through fielding of the 4x4 Probot UGV systems in several countries including the U.S., France, Israel, and the UK,” the companies said in a statement. Probot, made by Roboteam, can carry up to 1,650 lbs of supplies, equipment, or material. In October Probot participated in German military field tests.

Rook was designed from scratch Elbit Systems says. It was made “in compliance with applicable Military Standards, applying Modular Box structure enabling on-field components replacement with no need for qualified technician or original equipment manufacturer (OEM) lab maintenance, and efficient upgrades and modification without OEM involvement.” It includes a built-in Elbit Systems Torch-X application, which gives the platform “full autonomy and the capability to efficiently navigating rough terrain, during both day and night to deliver supplies, evacuate casualties, perform intelligence gathering missions (including by dispatching on-board VTOLs), and operate as a remote weapon system.”

It will weigh around 1,400lbs and can carry another 1,400 lbs as a payload. Like many Israel-made systems, it is designed for plug-and-play payload integration, usually meaning other systems can be added on or used with it. The companies say it can drive up to thirty kilometers an hour and has around eight hours of drive time. It is operated with either the Torch-X tablet-style display or a 7-inch ruggedized display unit. This means an operator could potentially control several unmanned systems with the same display.

Israeli companies are increasingly moving into the UGV space because that is where the future battlefield is likely going. This is a natural evolution from the increased use of drones in the air. Now unmanned systems are finding their role at sea and on the ground. For instance, Israel’s Carmel future fighting vehicle will eventually have optionally-manned varieties, designers have said in the past. In addition, other Israeli companies make UGVs. Israel Aerospace Industries (IAI) makes the Rex II. This is a “multimission system providing direct support to maneuvering infantry units. Can perform a variety of tasks: tactical logistic support, tactical ISR, operating lethal weapons through target acquisition, evacuating wounded soldiers. The Rex includes “follow-me” driving mode adapted for infantry forces,” IAI says. The IAI system has been delivered to the UK for an experimental program.

In April the Israel Defense Force (IDF) announced that the Jaguar, another UGV made by the IDF with IAI was currently being used by the IDF’s Gaza Division. It was deployed “in order to protect the Israeli-Gaza border. Equipped with dozens of sensors, an automated driving system, advanced fire capabilities, and a public address (PA) system, this robot makes the IDF a more efficient and technologically advanced military,” the IDF said in April. It can pack a 7.62mm machine gun.

This is the future battlefield, with unmanned systems using artificial intelligence and the latest algorithms to navigate and identify threats. It also means more “manned-unmanned teaming” or what is called MUM-T capabilities. “Equipped with Autonomy Kits and Electro-Optical payloads, a swarm of three THOR VTOL mini-UASs and Probot UGV performed a reconnaissance mission.” It also used Torch-X for its controls. The Thor drones were used in a kind of swarm. Israel has been using increased drone swarming technology in recent conflicts. In May in the Gaza conflict with Hamas reports emerged pointing to drone swarms being used and artificial intelligence increasingly being used in military programs. The Thor drone is one of the key platforms that Israel can use in drone swarms.

The recent demonstrations in Holland included using several Thor drones as well as the vehicles. In one scenario the drones were sent to resupply a front line unit. “Taking-off from different destinations the two platforms navigated to predefined locations conducted accurate landing and autonomously returned to their home bases upon mission completion. The third mission was an airborne deployment of Unattended Ground Sensors (UGS) using two THOR VTOL mini-UASs quipped with sensor dispensers. Operating as a swarm the two THORs arrived at pre-defined points accurately off-loading the miniature Lonely Rider UGS enabling data collection from ground sensors designed to enhance the ISR combat picture,” Elbit said at the time.

The combination of Unmanned Aerial Vehicles (UAVs) and UGVs looks to be how forces will operate more in the future. For developers and users, like the IDF and companies like Elbit, the key will be to try to fine-tune these systems so that soldiers can easily operate with them and trust them. Having drones buzzing around and unmanned vehicles plodding along is not a normal environment for a soldier to find themselves. That means acclimatizing units to all these machines. Israel’s experience over the years has seen some other attempts to roll out UGVs and it has taken time to integrate them. The new Momentum plan and multi-dimensional units Israel is using today is part of the program of getting units used to the new platforms. These types of innovations are also at the forefront of Israel’s new relations with Gulf states and its defense ties around the world, including with the United States and NATO members.