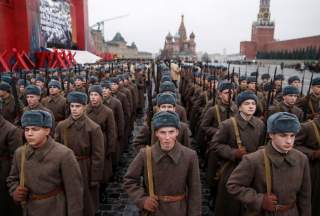 From air defense systems to nuclear submarines, the Soviet Union has enjoyed a longstanding, profitable defense export relationship with India. However, both the USSR and its Russian successor state have historically struggled to break into the Indian small arms market.

After decades of impasse, it appears that the Kremlin has found a solution in the form of Kalashnikov’s new AK-203 rifle.

President Putin greeted the occasion with a celebratory telegram, stressing the ways in which Russian defense technology complements India’s national security interests: "The new joint venture will manufacture world-famous Kalashnikov assault rifles of the newest 200 series and eventually will reach full localization of production. Thus, the Indian defense-industrial sector will have the opportunity to fulfill the needs of national security agencies in this category of small arms, resting upon advanced Russian technologies."

The Kalashnikov venture marks the end of New Delhi’s long, tortured search for a successor to the unreliable INSAS rifle that has served as the mainstay of the Indian armed forces since 1998. The AK-203, a 7.62х39 export variant of Kalashnikov new AK-12, boasts across-the-board performance improvements as compared with its INSAS counterpart.

The AK-203 eschews the infamous jamming and temperature operability problems plaguing the INSAS rifle, while boasting superior a lighter weight, shorter length, and modern assault rifle ergonomics. The latter includes polymer handguards, a picatinny rail, and an adjustable buttstock; while individually negligible, these features add up to an overall improved handling experience.

But the deal, signed for a whopping 750,000 AK-203 rifles with 40,000 to be directly imported, is no less significant from the perspective of the Russian arms export business. Would it have been more profitable in the short term to simply sell India 750,000 AK-203’s? Perhaps, but Rosoboronexport-- Russia’s official defense exporting agency-- hopes that this deal will give Kalashnikov a foothold in the Indian firearms industry for decades to come.

As Rosobornexport CEO Alexander Mikheev points out, the AK-203 is just the speartip of Kalashnikov’s plans for the Indian market: “The capacity of the plant is sufficient to arm the personnel of all security agencies in India. Should it become necessary, the parties will be able to ratchet up the production output and upgrade the facility to manufacture future models based on Kalashnikov's unique design.”

Kalashnikov’s previous efforts to expand into the Indian market stalled, among other reasons, due to the Indian preference for assault rifles chambered in 7.62x51mm NATO. Why, then, did New Delhi settle for the AK-203 in 7.62х39? There are few military reasons to opt for the smaller 7.62x39 casing, as 7.62x51 rounds will generally travel faster and farther under similar circumstances.

Rather, India’s change of heart likely comes from the logistical and financial benefits of the joint production arrangement between Kalashnikov and India’s Ordnance Factory Board (OFB) production organization. In specific, OFB will hold a 50.5 percent stake in the joint venture. A majority share gives the Indian government access to Kalashnikov’s considerable supply chain and technical expertise, while still retaining long-term political decision-making power over the course of the project.

The joint venture nonetheless marks an early milestone for Russia’s AK200 series, cleared for export in early February just prior to IDEX 2019. It also illustrates what Kalashnikov is sure to take as a positive affirmation of their expansive small arms export strategy, offering their flagship rifle in two different sizes and three distinct chambers so as to appeal to as wide a range of importers as possible.