Is the the Military About to Give Up Power in Sudan? 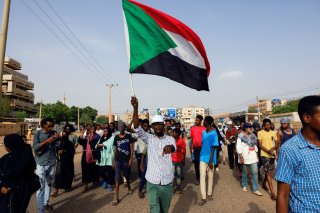 Gen. Abdul Fattah al-Burhan, the leader of the military junta that overthrew the civilian-led government of Sudan in October 2021, announced on Monday that he intended to voluntarily cede power to an opposition-led government after months of violent protests against his administration in Khartoum and around the country.

“The armed forces will not stand in the way” of a power transition, Burhan announced on Sudan’s state-run television network, vowing that his administration would support the holding of “elections in which the Sudanese people choose who will govern them.”

Burhan also promised that the Sovereignty Council, the joint military-civilian collective head of state that led Sudan from the overthrow of longtime dictator Omar al-Bashir in early 2019 until its capture by the military junta, would be dissolved after the elections led to the formation of a new government. He indicated that the new government would then be obliged to form a new Supreme Council of the Armed Forces, replacing the current military junta and assuming responsibility for Sudan’s security.

Prior to Burhan’s announcement, the Sudanese military had been involved in talks with opposition groups aimed at restoring a civilian government amenable to the military’s concerns. Burhan suggested that the army’s withdrawal from these talks was intended to allow the civilian factions to form a government via an “immediate and serious dialogue … that brings everyone back to the path of democratic transition.”

However, the general’s remarks suggested that he intended to remain in power until the dialogue process between the varying civilian factions was complete. This demand is unlikely to assuage the concerns of Sudanese civilian protesters, who have previously insisted on the resignation of the military government as a precondition to negotiations.

The seeds of Sudan’s current political crisis emerged after Bashir’s ouster in 2019. Although the military directly deposed the dictator, his officers’ decision to do so came after weeks of nationwide civilian protests, complicating whether his overthrow had been a popular revolution or a military coup. The ensuing Sovereignty Council, created as a temporary body intended to shepherd the country through free elections, included representatives from both the military and civilian factions until Burhan’s coup.

Since the coup in October 2021, weekly protests have continued. Over one hundred Sudanese have been killed in the ensuing violence, including nine within the past week, while thousands more have been injured.