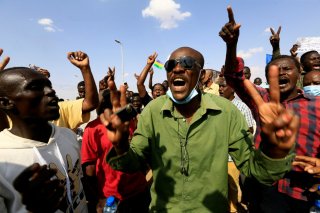 General Abdel Fattah al-Burhan, a Sudanese military leader who led the October 2021 coup d’etat overthrowing the country’s civilian-led transitional government, has announced a list of appointments to a second iteration of the country’s Sovereignty Council, following the first iteration’s dissolution.

Sudanese state-run TV announced that al-Burhan would remain at the head of the council, and “Rapid Support Forces” militia leader Mohamed Hamdan Dagalo, sometimes referred to as “Hemedti,” would retain his position as second-in-command. Various other representatives of Sudanese society, including five civilian leaders, have been included in the renewed council, but voices calling for an end to the coup and the restoration of civilian rule have prominently been left off.

The original Sovereignty Council was formed in 2019 after the overthrow of Sudanese dictator Omar al-Bashir. Because civilian protesters and military officers had both played a role in that overthrow, the Sovereignty Council included representatives from both factions, functioning as a collective head of state until democratic elections could be held in 2023. Military officials were barred from running in these elections, ensuring a future civilian leadership but creating a conflict of interest for the military, which ultimately responded with the October putsch.

Sudanese civilians reacted to the announcement with a fresh wave of protests, shutting down the capital city of Khartoum with street demonstrations and blockades. The Sudanese Professionals Association (SPA), a major Sudanese trade union that played a critical role in early protests, condemned the move and indicated that Sudanese would not recognize it.

“Burhan and his council’s decisions apply only to themselves,” the SPA announced in a statement. “They have no legitimacy and will be met only with contempt and resistance.”

Nearly three weeks have passed since the October 25 coup, in which Burhan and a group of other army officers overthrew civilian prime minister Abdalla Hamdok, imprisoning him incommunicado before releasing him to house arrest.

As Sudanese flooded the streets in opposition to the coup in its early hours, the reaction to the event around the world has been overwhelmingly negative, with most Western countries condemning the coup and urging Hamdok’s immediate reinstatement. The United States and the World Bank suspended humanitarian aid to the country, and the African Union expelled Burhan’s government until it agreed to resume the democratic transition.

Even Saudi Arabia and the United Arab Emirates, widely regarded as Burhan’s allies, released a statement in conjunction with the United States and the United Kingdom condemning the putsch and requesting that Burhan restore Hamdok’s government.