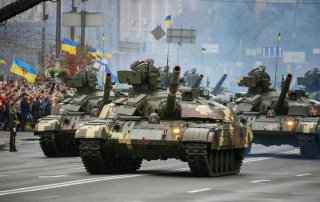 The Russian invasion of Ukraine has generated a united international response against Russia over what is largely understood as a “black-and-white” conflict by Western leaders and analysts alike. While this level of consensus and swift policy action are rare occurrences in twenty-first century world politics, an insistence on assigning blame to NATO aggression is pervasive among foreign policy voices.

Although this understandable sentiment stems from the problematic adventurism of recent U.S. foreign policy, the dynamics of great power competition in Europe need to be analyzed very differently than efforts to spread liberal democracy in the Middle East. For years, these critics have rightfully condemned U.S. interventionism for creating more problems than it solves, exacerbating much of the instability and human suffering throughout Iraq, Afghanistan, Syria, and Libya. However, to apply that same critique to a fundamentally different set of policies in Europe forces one to ignore key historical events and therefore misunderstand the conflict as a result of “NATO enlargement.”

The framing of Russia’s invasion as a predictable and just response to “NATO expansion” has been a popular tactic of both partisan and scholarly critics of the consensus position, albeit for different reasons. In attempts to promote Trumpian views on Russia, right-wing personalities like Tucker Carlson and Steve Bannon have each attempted to justify an invasion by arguing that the United States would do the same if an adversary made a security agreement with Canada or Mexico. Likewise, left-wing political leaders like Jeremy Corbyn have blamed NATO allies for “playing a provocative role” and denounced “eastward NATO expansion.”

Criticism from academia, often made in better faith, suggests that the United States deserves blame for disregarding the nature of great power politics. Political scientists like John Mearsheimer, a prominent critic of America’s post-Cold War foreign policy, have long held the position that NATO is endangering Ukraine by enticing it with Western integration. In a recent interview, Mearsheimer implicitly validated Russia’s fears of the West “turning Ukraine into a pro-American liberal democracy” at the expense of Ukraine’s self-determination. Implying that the world is better off when great powers dictate other countries’ foreign policies, he acknowledged that countries like Russia “have that say” because “this is the way great powers behave.”

Revisionist interpretations of Russia’s threat to Europe aside, the primary issue with Mearsheimer’s argument is his misframing of NATO’s growth in Europe relative to Russia’s responsibility for the war. He depicts the growth in membership as “NATO expansion,” with strong implications that the West, particularly the United States, pushed NATO onto unwilling post-Soviet states in an act of great power politics. However, when addressing Russia’s role in the conflict, he takes Russia’s security concerns at face value while failing to recognize Ukraine’s and blames the United States for not working around this predictable behavior. This analysis not only denies states their agency, but it is completely disputed by the history of Eastern Europe’s relationship with NATO.

Simply put, “NATO Expansion” is a misnomer. While it is technically correct to assert that the organization has grown in membership, this phrasing is laced with imperialist overtones that suggest that the West coerced ex-communist states into joining NATO. However, the history of post-Cold War Europe shows that the young nations were in fact more eager to join NATO than the West was to accept them.

Following the collapse of the Soviet Union, ex-communist states aspired to model the democratic and market-oriented institutions of the West. Devoted to economic, political, and security integration, a group of Central European states—Poland, Hungary, and Czechoslovakia—convened and formed the Visegrád Group in 1991 to accomplish this. The (now) four countries coveted NATO and EU membership because they felt that they were the only bodies capable of providing them with credible security guarantees and supporting democratic reforms in their societies.

Among Visegrád citizens, NATO membership was incredibly popular. In 1997, the year of Hungary’s invitation, a referendum showed that 85.3 percent of people supported membership. That number was 87 percent for the same year in Poland. While NATO was less popular in the Czech Republic, approval for NATO was over double the opposition.

In the Baltics, Estonia, Latvia, and Lithuania were unwavering in their suspicion of Moscow’s intentions. Exacerbated by Russia’s continued refusal to acknowledge its past abuses against them, the Baltic states saw NATO membership as the most feasible way to assuage their fears of Russian aggression. On the region’s support for the alliance, former Latvian president Vaira Vike-Freiberga said it best: “The fact that you can go to bed and not worry about somebody knocking on the door and putting you on a train for Siberia.”

Throughout the Clinton and Bush administrations, the Baltics’ aspirations for NATO membership were evident. When the opportunity arose to demonstrate their military value to NATO, they delivered by volunteering with NATO members to form the Baltic Peacekeeping Battalion and participating in NATO’s Afghanistan mission without contingencies for membership. The three states took every preliminary step by signing onto the Partnership for Peace, Membership Action Plan (MAP), Vilnius Group, and Baltic Charter of Partnership, which aimed to “create the conditions” for NATO admittance and ultimately made their fate inevitable.

For all other states who joined from 1999 to 2020, the story was largely the same. Exhibited in the creation of the Vilnius Group in 2000, six Balkan states—Albania, Bulgaria, Croatia, North Macedonia, Romania, Slovenia—and Slovakia partnered with the Baltic states to lobby for NATO membership in unison.

Unlike ex-Warsaw Pact states, former Soviet republics like Ukraine faced greater challenges in the membership process. Although Ukraine was incorporated into the Partnership for Peace, a gateway to membership, in 1994, it has repeatedly faced setbacks in the process, most notably being denied a MAP at the 2008 Bucharest Summit. For many, the move to add Ukraine and Georgia, two former Soviet republics, was seen as too risky for NATO-Russia relations. Despite an American push for the MAPs, most allies did not find the timing suitable because of low support for NATO membership in Ukraine and fears of provoking Russia.

By the 2014 Annexation of Crimea and Donbas Civil War, NATO membership was all but impossible. If Ukraine were to be admitted under these conditions, NATO would be forced to both quell a separatist revolt and invoke Article V against Russia. However, as the prospects for a MAP vanished, NATO’s popularity drastically increased in Ukraine. During the recent military buildup in December, support for joining NATO among Ukrainians was 54 percent, with most of the opposition coming from eastern Ukraine, driven largely by the presence of pro-Russian separatists in the Donbas.

Not only did NATO not impose itself on neutral states, but it was reluctant to support their aspirations for accession. In fact, NATO was highly aware of the risk of provocation, which one NATO Review author cited as a primary reason why enlargement “would create more problems than it would solve.” U.S. national security officials who specialized in Russia were “almost completely opposed to expansion,” and even George Kennan, the architect of containment, voiced his contempt.

While candidate states eagerly awaited invitations, NATO members judiciously weighed the costs of enlargement and laid out conditions of reform. In 1995, NATO issued strict political and military criteria for aspiring countries that included adherence to democratic principles and the resolution of outstanding border disputes. Due to the heavy desire to join NATO, these conditions promoted meaningful change in civil-military relations in Poland and Hungary and incentivized territorial settlements in the Visegrád states, Romania, and Ukraine.

In examining NATO’s growth, it is evident that great power politics were at play. However, Eastern Europe’s impassioned desire for accession was significant to NATO’s enlargement. Post-Soviet states suffered heavily under Russia and therefore preferred regional security from the stronger and less-threatening power in the West. This benefited the security and hegemonic interests of both the United States and Eastern Europe, which led to mutual cooperation in increasing NATO membership.

The only successful deterrent of Russian aggression since the Cold War has been the presence of NATO. While Mearsheimer’s overly simplistic outlook suggests that NATO enlargement contributed to the invasion of Ukraine, it is certain that Ukrainian membership would have prevented the current invasion and the occupation of Crimea. If only NATO was more popular amongst Ukrainians and properly marketed as a security guarantee against Russia, Ukraine could have been saved from eight or more years of violence and suffering. The lesson to be learned is that NATO did not enlarge far or fast enough.

Daniel Ramallo is a student at University of Wisconsin-Madison studying political science and history with an interest in international security.