N95 Mask is Key to Fighting the Corona Virus—The U.S. Has Stockpiled Only 1% of The Quantity Needed 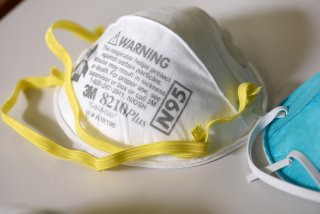 Set aside your missile defense shields. As coronavirus disease 2019 (COVID-2019) pandemic spreads its tentacles across the globe, one of the most essential technologies for saving lives in America and across the globe is the humble N95 face mask.

The masks are vital to keep doctors and other medical personnel from getting infected while treating patients. During past SARS and Ebola epidemics, many healthcare workers were infected and died.

If too many healthcare workers are disabled by illness, there won’t be enough doctors available to treat patients. And then more patients with treatable cases are likely to die.

But unfortunately, maintaining an adequate reserve stockpile of N95 masks is one form of national defense the United States failed to invest in—with only 1 percent of the predicted needed supply available in the national stockpile.

A typical surgical mask is designed to form a physical barrier against larger droplets and sprays of fluid. That means surgical-style masks are somewhat effective at reducing odds of transmitting fluid airborne transmission-propagated COVID-2019, both when worn by an infected person (to contain the spread of the virus from them) and uninfected persons (to avoid being infected).

However, surgical masks don’t offer much protection against small particles, including some of those created by the aerosol effects of a sneeze. For that you need an N95 mask.

N95 is technically not a single mask design, but rather a standard established by the National Institute for Occupational Safety and Health (NIOSH). It must have air filters and forms a tight seal against the face, allowing it to block 95 percent of airborne particles. You can see the differences outlined in this chart.

Technically, there are both FDA-certified medical N95s and as well as NIOSH-approved industrial variants of the mask to deal with disease and pollutant threats respectively, though reportedly provide the same degree of production.

Either way, the masks are only ideally used for a single session, and then should be discarded.

Currently, the Center for Disease Control doesn’t recommend everyday citizens use either N95 or surgical masks. However, the Chinese government has recommended using surgical masks, and CDC may eventually advise the same if the disease becomes sufficiently prevalent in the United States.

However, for “civilian” use, a surgical mask will make sense, not the N95. That’s because the latter are uncomfortable and in more limited supply, and the degree of protection they offer is most warranted for healthcare workers that will be working very closely with infected patients.

I recall being issued an N95 mask when I began my two-year service in the Peace Corps in China. All volunteers were required to hold on to that mask for the next two years of service in the event that an epidemic broke out like the SARS virus did in 2003, which resulted in the evacuation of all volunteers in China at the time. Should that recur, we were told we should put on the mask and keep it on while evacuating.

Because N95 masks are only meant to be used for a single session—and are considered compromised once removed—ideally a doctor treating lots of COVID-2019 patients would consume dozens of masks over a 100-day period. Multiply that by the many, many doctors needed to treat patients of a disease that experts believe may infect over half of the population in the United States, and you need billions of masks.

Specifically, the assistant secretary of the Department of Health and Human Services estimated 3.5 billion in a March 3 hearing before Congress.

Unfortunately, there are nowhere near that many available in the U.S. Strategic National Stockpile originally formed by the Clinton administration in 1999 to facilitate twelve-hour medical response to deadly WMD-based terror attacks. The SNS has only 12 million medical N95 masks plus 30 million medical face masks.

This is actually a fraction of the former size of the stockpile, as the SNS distributed 85 million N95s to aid in containing the Swine flu epidemic in 2009.

The SNS has roughly 200 staff, and has a number of secret warehouses across the country. So far, it has released a fraction in response to the COVID-19 epidemic.

The Pentagon has donated five million of its N95 masks, and the Dept. of Health and Human Services has ordered 500 million N95 masks for the next eighteen months in the hopes that will foster increased production. But those obviously meet a fraction of the need.

As a result, hospitals are already running out of N95s and unable to buy more because they’re sold out. The few circulating on the private market have multiplied in value due to gouging. So doctors and nurses are increasingly reusing the single-use masks for days or cutting other corners. And that’s well before COVID-2019 has reached its peak in the United States.

N95 masks usually have a shelf life of five year, and the SNS has over 5 million expired N95s. But given the rising demand for the masks, the CDC has determined that several types should remain effective and get used despite having exceeded their “use-by” date. That’s a grim indicator of the seriousness of the shortage.

More worryingly, CDC guidelines have deemed the use of surgical masks an “acceptable alternative” instead of N95s because “the supply chain of respirators cannot meet demand.” Just to weeks earlier, the CDC stated it “opposed any measures that fail to provide optimal protection and infection control standards.” Now it argues N95s should be reserved for high-transmission risk procedures, such as intubation.

To be fair, a 2019 study by the Journal of the American Medical Association drawing from a sample of 2862 healthcare workers did not find a statistically meaningful difference in flu transmission rates between health care workers protected by N95s versus medical masks. Whether that would also hold true for the more contagious COVID-2019 is unclear.

Another issue is that China accounted for 50 percent of world manufacturing of masks and has multiplied production rate twentyfold by March to 200 million masks a day since the outbreak in Wuhan. Even car and iPhone factories have been repurposed towards mask production, though the country faces a material bottleneck in the availability of melt-blown fabrics. However, the micron-fiber materials used in N95s have limited production there to only 600,000 a day.

Unfortunately (though understandably) China is reserving most of its masks to treat COVID-2019 domestically—which means too few masks are being exported. However, Beijing has donated millions of surgical masks to Iran, Italy, the Philippines, and South Korea, and exported over 100,000 N95 masks to Italy.

France has also requisitioned all mask production through May for domestic purposes. Similar steps are being taken in the Czech Republic, Germany and Italy.

Unfortunately, the U.S. government failed to take adequate action to begin building up its stockpiles for two entire months following the outbreak in Wuhan

Finally, Congress voted to relax legal liabilities to facilitate production of hundreds of millions more masks, including by certifying masks normally intended for industrial use for medical purposes. This will result in domestic production being ramped up by hundreds of millions of masks annually—but not the billions needed, certainly not in the short timeframe that infected cases seem likely to spike.

The SNS’s shortage reportedly isn’t due to mis- its funding so much as the reality that it was asked to perform so many vital tasks for the wealthiest country on the planet with a mere $600 million annual budget. As The Drive’s Tyler Rogoway points out, maintaining a deep stockpile of life-saving N95 masks, or even more expensive but ultimately still affordable ventilators, would have cost the price of a single “cheap” littoral combat ship or a few F-35 stealth fighters.

The money was found to pay for potential wars abroad, but not the deadly war against disease we are facing today.

One can only hope the U.S. government can summon the capacity to mobilize manufacturing with the same vigor that China has done to combat the crisis. For now, citizens can contribute by not hording supplies of N95 masks, which should be reserved for the professionals at most risk and with the most ability to contribute to the fight against the virus.