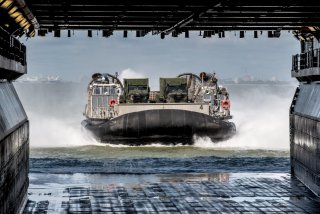 The Navy’s seventy-two existing LCACs, which have been in service since the 1980s, can only transport up to sixty tons, reach speeds of thirty-six-knots, and travel up to 200 nautical miles from amphibious vehicles, Navy officials explain.

Textron engineers told The National Interest that the SSC’s digital flight controls and computer automation will replace the traditional yoke and pedals used by current connectors. As a result, on-board computers will quickly calculate relevant details such as wind speed and navigational information.

The frequency of the SSC’s ship electronics will be reduced from 400 Hertz to 60 Hertz. This lower frequency will allow the SSC to better synchronize ship systems with Navy common standards, Textron developers told The National Interest. Along with these properties, the number of gearboxes in the craft has dropped from eight to two.

It makes sense that the Navy would want to request more landing craft connectors, given that its Distributed Maritime Operations strategy calls for fast-moving, disaggregated, and highly networked operations across wide swaths of the ocean. This strategy leads to forces becoming less concentrated, therefore reducing their vulnerability to enemy fire. Moreover, it also greatly enhances the Navy’s ability to reinforce a beachhead amphibious landing with Marines, weapons, supplies, and even heavy armored vehicles.

As potential adversaries now have longer-range weapons, better sensors and targeting technologies, and advanced computers, amphibious forces approaching the shore may need to disperse in order to make it harder for enemy forces to target them. This strategy—using advanced weaponry designed to make it more challenging for U.S. forces to operate in certain areas—is described by Pentagon analysts as “anti-access/area-denial.”