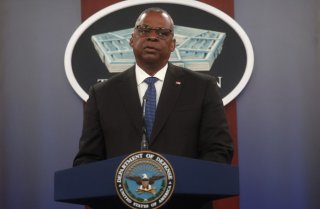 The U.S. Defense Department’s quadrennial National Defense Strategy, released on Thursday, identified China as the foremost challenge to U.S. national security and called for increased deterrence against Beijing while continuing to confront other U.S. adversaries in Eurasia and the Middle East.

“The most comprehensive and serious challenge to U.S. national security is the PRC’s coercive and increasingly aggressive endeavor to refashion the Indo-Pacific region and the international system to suit its interests and authoritarian preferences,” the report read, using the acronym for the People’s Republic of China, the country’s formal name. In the introduction to the strategy, Defense Secretary Lloyd Austin described China as Washington’s most “consequential strategic competitor for the coming decades.”

The report drew attention to the activities of the People’s Liberation Army, China’s military, which it accused of “working to establish a more robust overseas and basing infrastructure to allow it to project military power at greater distances.” It also warned that China was increasing its stockpile of nuclear weapons and improving its nuclear technology. In response to this threat, the report recommended that the United States modernize its own nuclear arsenal, emphasizing the need for the continued maintenance and development of the nuclear triad of land-based missiles, submarine-based missiles, and aerial bombs.

The report also warned that Russia presented an “acute threat” to U.S. interests abroad, observing that its invasion of Ukraine had led to economic turmoil and negative geopolitical implications for the United States. In a post-publication press conference, Austin argued that Russia “can’t systematically challenge the United States over the long term,” but still “pose[d] an immediate and sharp threat to our interests and values.” Other threats mentioned included those from North Korea, Iran, and non-state terror organizations including Al Qaeda and ISIS. The report also discussed the geopolitical consequences of climate change, noting that natural disasters and shortages of natural resources in the developing world would exacerbate existing political tensions and encourage armed conflict if left unaddressed.

The assertions in the National Defense Strategy closely matched those contained within the National Security Strategy released by the White House two weeks earlier. That report referenced threats from Russia and other U.S. adversaries but characterized China as “the only competitor with both the intent to reshape the international order and … the economic, diplomatic, military, and technological power to do it.” Both strategies were made available to lawmakers earlier in the year but contained redactions to remove sensitive information prior to public release.

China’s foreign ministry condemned the National Security Strategy after its release, accusing the United States of holding a “Cold War zero-sum mentality” rather than attempting to form a mutually beneficial relationship between the two countries. Ties between Washington and Beijing have rapidly deteriorated over the past decade as China has sought to expand its influence in the South China Sea, exert increasing authority over Taiwan, and crack down on dissent in Hong Kong and Xinjiang.

The release on Thursday marked the first time that all three of the Defense Department’s major strategic reviews—the National Defense Strategy, the Nuclear Posture Review, and the Missile Defense Review—had been published simultaneously and in the same document.