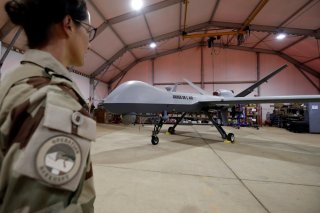 The parliament of Niger, a desert country in Africa’s thinly-populated Sahel region, is scheduled to debate the presence of Western troops helping the country’s army against an ongoing Islamist insurgency on Friday, according to AFP.

After the debate, the parliament will take a vote on allowing the foreign troops to remain or sending them away, although the outcome is nearly certain to be in favor of allowing them to stay. If the troops are allowed to stay, a government source indicated that new facilities would be constructed for them in Niamey, Niger’s capital.

Al Qaeda, the Islamic State (ISIS), and other Islamist groups have been active in Niger since the onset of the Arab Spring led to instability in North Africa, creating an opportune operating environment for anti-government factions. After the government of Libyan dictator Muammar el-Qaddafi fell, weapons looted from his armories traveled south into the Sahel, where they aided ethnic Tuareg rebels in northern Mali in an attempt to secede from the government in the south. The Tuaregs recruited Islamist fighters for assistance, but the Islamists eventually grew stronger than the Tuaregs and took over much of northern Mali, helping to spawn the region-wide insurgency.

These developments led France and other Western nations to deploy to the Sahel in “Operation Barkhane,” an anti-Islamist military campaign that has continued since 2014. Although the operation has faced difficulties in other countries in the region—notably Mali, where a military coup in 2020 put the government sharply at odds with the French, who ultimately withdrew in early 2022—it continues in Niger and neighboring countries.

A Nigerien government document circulated prior to the vote said that the county needed to commit to “an effective fight against terrorism … in the framework of bilateral or multilateral cooperation, either current or in the future.” The document stated that, with the approval of legislators, additional “foreign troops bases … will be set up nearer the theaters of operation” in Mali, where the Islamist groups have the most support.

Niger is the poorest country in the world, according to the United Nations, and has struggled to form a centralized government since its independence from France in 1960. Its security situation has also deteriorated over the past decade, as it simultaneously borders two significant Islamist insurgencies—one in Mali and a second in northern Nigeria, both of which have caused significant spillover within Nigerien territory.

Although Bazoum has vocally supported the presence of foreign troops to assist Nigerien troops, he promised parliament in February that he would put any new “arrangements” to a vote in response to domestic criticism.