This Is No F-35 or F-22, But This Plane Is Critical to the Air Force (And It Might Be Retired) 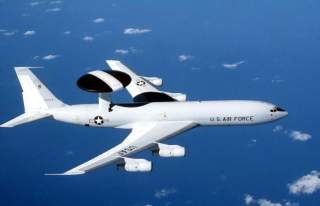 Key Point: The meager savings of ending their programs might not be worth the gaps in defense the retirements could cause.

The Air Force relies on a small but diverse fleet of tricked out Boeing 707 airliners with specialized sensors and communications links to perform vital reconnaissance and command-and-control missions across the globe.

However, developments in 2019 suggest the Air Force might retire its large-aircraft ISR (intelligence/surveillance/reconnaissance) and airborne command-and-control fleet early.

Air Force Chief of Staff General David Goldfein earlier stated that “night courts” had identified $30 billion in current Air Force spending he’d like to cut to free up money for four new modernization priorities (described at the end of this article)—specifically targeting older “legacy” aircraft nearing the end of their service lives.

In November, Todd Harrison of the Center for Strategic and International Studies published a report listing eight legacy aircraft types that might be targeted for early retirement in the next five years—including the 707-based RC-135 reconnaissance planes, E-3 Sentry airborne early-warning aircraft and E-8 JSTAR battlefield surveillance and command jet.

A companion article looks more broadly at the operational, financial and political implications of retiring aircraft types, and focuses on five other “legacy aircraft” identified as potential candidates for retirement: the A-10 attack jet, the B-1A and B-2B bombers, the KC-10 tanker and the U-2S spy plane.

In this piece, we’ll look into the future of 707-based aircraft, which might eventually be replaced by a ground-based network, and how Goldfein envisions using the desired $30 billion in savings.

61 years ago, the Boeing 707 entered service with Pan Am airliners, forever transforming commercial air travel.  But while the last of the four-engine jetliners was retired from passenger service in Iran in the early 2010s, the U.S. Air Force still operates nearly 400 707-based KC-135 tankers and over 70 RC-135, E-3 and E-8 aircraft

Why are the last three types potential targets of despite having seen extensive use in the last 40 years?

In part, it’s because of their size, age and large crews results in hefty operating costs.  And though highly useful when safe from attack, in a high-intensity conflict these planes could prove vulnerable to long-range anti-aircraft missiles and stealth fighters and would likely be forced to operate hundreds of miles away from active combat zones.

The Defense Department is investing in drone-, space- and ground-based alternative systems to perform those same missions without the expense and risk of putting a lot of people into a big airplane to do the job.  Eventually, the service plans to have those systems relay data and command-and-control links to a ground-based facility in Robins Air Force Base, Georgia.

This “system of systems”, called the Advanced Battlefield Management System, is foremost intended to replace the E-8 (also based at Robins).  However, ABMS could have its mission expanded to cover the roles of the RC-135 and E-3, for which there are no replacements in development.

But there’s one big catch: the ABMS only exists as a software engineering concept at the moment, and the Air Force hasn’t even yet to proposed what new forward-deployed platforms could replace the 707s-derivatives.

“The Air Force has not clearly articulated what ABMS will be or when it will be operationally available,” Harrison wrote to me in an email.   “It is still just a concept and not yet a program of record. It would certainly need to accelerate ABMS if it retired the E-3 and RC-135 early.”

However, it may not need to develop a bunch of replacement sensor and communication platforms from scratch.

“This could be possible if the plan is for ABMS to leverage airborne platforms and sensors that already exist—and new sensors in low Earth orbit—and network them together in new ways to perform the missions the E-3 and RC-135 perform today. I think the space layer for ABMS will be especially important.”

Let’s take a closer look at the three aircraft types that might be targeted for early retirement, the savings retiring them could entail in a five year period, and the capability gaps that might result.

Does it leave a gap? Yes—the Air Force has no plane in development to replace the E-3, and would need a large airborne radar that could accompany its jet fighters to fulfill that role.

Role: The E-8 is a flying battle management center that uses a surface-scanning surveillance radar to track the position of ground forces, and use numerous communication links to relay data and coordinate friendly troops and aircraft in response.

Does it leave a gap? An E-8 replacement has been canceled.  In theory a combination of drone- and satellite-based sensors, and communication relays tied together by the ABMS will eventually take its place. Should the E-8 be retired early, such relays might need to be organized on an ad-hoc basis.

Role: All three types are based at Offutt Airbase in Nebraska.

Rivet Joint signals intelligence aircraft are used to listen in on signals traffic, geolocate their points of origin, and profile their electromagnetic signatures.  They can also promptly relay that data to friendly forces for operational effects.

Combat Sent planes analyze radar emissions produced by potential adversaries to profile their systems and develop countermeasures against them.

Does it leave a gap?  The RC-135V/W’s mission could be replaced by RQ-4B Global Hawk drones using signals intelligence payloads.  However, the more specialized capacities of Cobra Ball and Combat Sent may be difficult to replicate with the desired degree of fidelity.

Of course, Goldfein’s planned $30 billion in cuts likely includes other measures besides retirement of legacy aircraft.  For example, the Air Force must decide whether it procures F-15EXs to replace its soon-to-be retired F-15Cs air defense fighters.  It could also choose to downsize large existing fleets of MQ-9 Reaper drones or F-16 fighters, though the relative savings per aircraft are lesser than for retiring an aircraft type.

Where would that money go to instead?

Goldfein has outlined a four-point plan on how he’d like to spend his $30 billion in savings—pending Congressional approval.

The smallest allocation is $3 billion to improve “Logistics Under Attack”— referring to hardening forward bases and refueling tankers to make them more resilient to attacks from long-range missiles.

The remaining $27 billion would be evenly divided between “Generating Combat Power” (penetrating and eventually dominating enemy airspace), new space capabilities, and improving connectivity of sensors and command-control across services and platforms.  This last objective ties neatly with the Navy’s Cooperative Engagement technology and the Army’s Multi-Domain Battle doctrine.

Goldfein has not elaborated more specific programs the money would be spent on, which could make it difficult to sell Congress on the cuts.  As he stated recently in a conference, “the reason for taking legacy [systems] down—is that we’re building up [successors] in classified.”

However, an earlier article by Breaking Defense hints money may go to increasing procurement of B-21 stealth bombers, fielding more long-range missiles, installing more fuel-efficient engines in B-52 bombers, and deploying a more decentralized and survivable satellite network with ‘active defense’ capabilities.