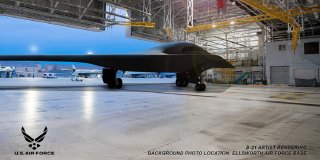 The new stealth U.S. Air Force B-21 bomber has taken yet another key technological step toward being ready for war, through integrated computer automation designed to streamline information, improve targeting and offer pilots organized warzone information in real-time.

Through virtualization and software-hardware synergy, B-21 sensors, computers, and electronics can better scale, deploy and streamline procedural functions such as checking avionics specifics, measuring altitude and speed and integrating otherwise disparate pools sensor information. In effect, it means war-sensitive sensor, targeting, and navigational data will be managed and organized through increased computer automation for pilots to make faster and more informed combat decisions.

Roper’s post on LinkedIn explained it this way… the “USAF innovation hasn't missed a beat during COVID-19. Our B-21 team just ran containerized software with Kubernetes on flight-ready hardware! Another step towards “DevStar”: our initiative to bring radical autonomy to software development, partnering with Northrop Grumman.”

While most of the B-21 development is “black,” for understandable reasons, Roper’s comment offers an interesting window into some of what developers generally describe as a new generation of sensing, computing, targeting, and processing information made possible by rapid software modernization. He referenced a number of terms which, upon closer examination, point to some technical modernization methods able to massively improve combat performance.

Containerized software, among other things, refers to an ability to program computer operating systems to streamline and compartmentalize different functions simultaneously, yet without launching an entire machine for each app, according to “Kubernetes’” website.  Roper cited Kubernetes, which is a computer system for “automating application deployment, scaling, and management.” Much of this, as cited by Roper, is made possible through what’s called application containerization; it is defined as,an operating system-level “virtualization method used to deploy and run distributed applications,” according to Techtarget.com. Containerization enables multiple “isolated applications or services run on a single host and access the same operating system.”

By drawing upon software-enabled virtualization, systems can upgrade faster, reduce their hardware footprint, and better employ automation, AI, and machine-learning applications. In all-out warfare terms, this means B-21 pilots can share information and find and destroy targets such as enemy air defenses … much faster. This is something that can expedite precision weapons attack and identify approaching air and ground threats and, perhaps of greatest importance, keep pilot crews alive.

AI-applications, optimized by new algorithms, can absorb new war-sensitive information, bounce it off a seemingly limitless database and quickly perform comparative analyses to make decisions, prioritize information and streamline the organization and presentation of data for humans operating in the role of command and control. The concept is to, as Roper put it in his post, better expedite the famous OODA-loop decision-making process. OODA Loop, made famous years ago by Air Force fighter pilot John Boyd,  stands for Observation, Orientation, Decision, Action. It refers to the importance of getting inside an enemies’ decision-making process by completing the OODA loop faster and more accurately, therefore taking key life and death actions to destroy an enemy… faster.

The concept behind increased automation is to ease the “cognitive” burden upon the pilot by performing time and energy-consuming procedural functions autonomously… all while leaving human decision-makers in the irreplaceable role of command and control. This way, dynamic, capable human problem solving can be more fully and effectively leveraged in combat. In summary, pilots will be able to make faster and better decisions, therefore “owning the OODA Loop” as Roper put it in his published comment.

Not only will integrated next-generation software exponentially speed-up war-sensitive decision making, but it will also increase performance for weapons systems. Things like weapons guidance systems, weapons network security, processing speeds, and major war platform functionality. Long-range sensors for an airplane’s command and control systems and of course procedures to aggregate otherwise stovepiped data systems, can all be optimized through software upgrades.

All of this pertains to Roper’s reference to “DevStar,” a strategy through which the Air Force has been expediting technical development to bring a new generation of weaponry and technology to war much more quickly. Much of this, according to Roper’s strategic vision, relies upon software integration and innovation. An Air Force DevStar paper describes it as “speed, quality, focus and collaboration.” The idea is to, at least in part, circumvent or streamline lengthy, at time bureaucratic acquisition procedures to fast-track proven systems to war, all without compromising quality. Much of this, Roper has often explained, can be expedited through digital development, essentially modeling designs and technical systems prior to “bending metal.”

Roper has long emphasized the importance of rapid software development and integration, having at one time told reporters that software modernization may indeed “decide who wins the next war.”