Is the Orion UAV Russia's Answer to Ukraine’s Turkish Drones? 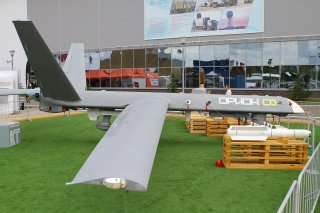 Zapad  2021—Russian for “West 2021”—is the latest in a rotating annual cycle of four major Russian military drills, preceded by Kavkaz (Caucasus) 2020, Tsentr (Center) 2019, and Vostok (East) 2018. Russia’s military tested a slew of new and recent unmanned aerial vehicles (UAVs) over the course of the Zapad 2021 exercises. "The Inokhodets [Orion] and Forpost strike and reconnaissance drones, equipped with guided missiles, observation and targeting systems, were used for supporting the attacking forces for the first time," the Russian Defense Ministry told journalists in September.

The Orion UAV is a medium-altitude strike drone that was previously tested by Russian forces in Syria. The base version of Orion features a range of roughly 250 kilometers and can reportedly carry up to four guided bombs with a maximum payload of 200 kg, whereas the drone’s upgraded Inokhodets-RU variant is bigger, slightly faster at a speed of 295 kilometers per hour, and can carry up to 450 kg of munitions. The Forpost is a Russian licensed copy of the Israel Aerospace Industries (IAI) Searcher reconnaissance drone. The model present at the exercise could have been the upgraded Forpost-R variant, which reportedly adds strike capabilities. The drills also featured the Uran-9 autonomous combat vehicle. Billed as a “robot tank,” the Uran-9 sports a formidable 30mm 2A72 autocannon, four anti-tank missiles, and a secondary machine gun armament.

The Kremlin’s renewed interest in combat drone technology comes shortly on the heels of news that Ukraine is moving forward with its planned purchase of dozens of Turkish-made Bayraktar TB2 combat UAVs, part of a larger defense cooperation venture involving the joint production of dozens of Bayraktar drones on Ukrainian soil. A Ukrainian Bayraktar drone struck an artillery piece in the pro-Russian separatist region of Donbas to the country’s east in late October, prompting outrage from Moscow.

Russian politicians and defense industry officials maintain that Russia’s latest combat drones outperform the Bayraktar, which was introduced in 2014. "Russian-developed drones don’t just have the same technical capabilities as the unmanned aerial vehicles that you mentioned but outperform them," said Russian deputy prime minister Yury Borisov when asked about the TB2 earlier this month. "We certainly have a chance to play a role on the market,” Borisov added. “Historically, the market was dominated by Israeli, American, and Chinese producers who were quite active in the past six years, in a very intense and even aggressive manner. However, Russia still has a chance.”