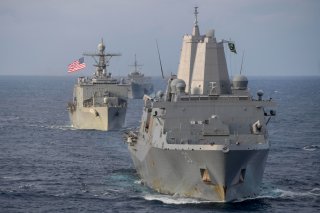 The U.S. Marine Corps will rely on the Light Amphibious Warship to shuttle Marines and supplies throughout the Pacific in support of Marine operations in the world’s largest ocean.

A recent document published by the Congressional Research Service, a nonpartisan think tank that reports to the U.S. Congress, shed light on the problems surrounding the Light Amphibious Warship’s procurement program.

The document quotes a recent publication, explaining that “Navy Secretary Carlos Del Toro, a Biden appointee and retired naval officer, has been a proponent of keeping the number of amphibious warships at its current strength of 31, a vision shared by Marine Corps Commandant Gen. David Berger who won support in Congress this year to block Pentagon plans to have the fleet shrink to 25 ships in the coming years.”

It added that, despite the agreement at higher levels, “Marine and Navy leaders are at odds with each other over another issue: Berger also wants to add 35 new light amphibious warships to allow his Marines to move through island chains more quickly while presenting less of a target. That’s a vision Navy leadership has never fully supported.”

“There is friction not just between the Navy and Pentagon leadership, but within the service as well. The Marine Corps’ plan for the light amphibious warship was pushed out of the Navy shipbuilding budget two years in a row,” the document explained. “The fiscal 2023 budget request shows the new ship being funded in fiscal 2025—after Berger is slated to retire.”

“The move also throws cold water on Berger’s plan to give units of 75 Marines the flexibility to carry a wide range of weapons with them at sea, including anti-ship missiles, drones and supplies to rearm friendly forces. That ship, however, is the cornerstone of the Marine Corps’ modernization priorities. The Marine Corps envisions using the light amphibious warship to ferry Marines from beach to beach while hiding in plain sight, as the new vessel is the size of other commercial ships.”