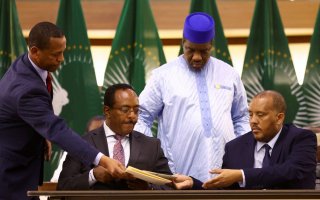 The Ethiopian government and the Tigray People’s Liberation Front (TPLF) rebel group, the two belligerents in Ethiopia’s ongoing civil war within the country’s northern Tigray region, agreed on Wednesday to a “permanent cessation of hostilities”—a development that is likely to end the world’s worst conflict and save hundreds of thousands of lives.

Former Nigerian president Olusegun Obasanjo, the African Union’s lead mediator for the bilateral talks in South Africa, announced the news on Wednesday, claiming during a press conference that the two sides had agreed to an “orderly, smooth, and coordinated disarmament” and the “restoration of law and order … restoration of services [and] unhindered access to humanitarian supplies” in Tigray. Obasanjo vowed that the agreement would mark a new “dawn” in Ethiopia’s history.

The Tigray War began in November 2020 after Ethiopian prime minister Abiy Ahmed deployed troops to the region after clashes between local soldiers and TPLF forces. Although the Ethiopian government made significant early gains in the war, capturing the Tigrayan capital of Mekelle, the Ethiopian army was forced to retreat the following year. Since 2021, the war has remained a bloody stalemate, with thousands of military casualties on both sides, hundreds of thousands of civilian deaths from starvation and disease, and millions of refugees forced to flee conflict areas. Throughout the war, Ethiopian forces blockaded Tigray, cutting off its access to banking and internet services and allegedly preventing humanitarian aid from reaching famine-affected areas.

The South Africa talks did not include Eritrea, which borders Tigray to the north, has long opposed the TPLF, and continues to participate in a simultaneous military campaign against the group. However, Abiy claimed on Wednesday that the agreement nonetheless represented the end of the country’s civil war and suggested that humanitarian aid deliveries would quickly be allowed to enter Tigray.

“The commitment to peace remains steadfast,” he said. “And our commitment to collaborating for the implementation of the agreement is equally strong.”

The TPLF also announced that it had approved the deal with the group’s primary spokesman, Getachew Reda, claiming that it was “ready to implement and expedite this agreement.”

“In order to address the pains of our people, we have made concessions because we have to build trust,” Reda said in a statement. “Ultimately, the fact that we have reached a point where we have now signed an agreement speaks volumes about the readiness on the part of the two sides to lay the past behind them [and] chart a new path of peace.”

The international community swiftly celebrated the truce and congratulated the mediators. United Nations secretary-general Antonio Guterres described it as a “welcome first step, which we hope can start to bring some solace to the millions of Ethiopian civilians that have really suffered during this conflict,” according to spokesman Stephane Dujarric. U.S. secretary of state Antony Blinken also lauded the agreement, describing it as a “momentous step” and praising the negotiators.