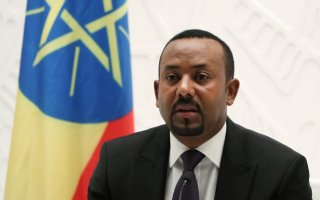 Representatives from the Tigray People’s Liberation Front (TPLF), the rebel group seeking independence for Ethiopia’s northernmost Tigray region, announced on Sunday that it was willing to participate in peace negotiations led by the African Union (AU), marking a major step forward in the international community’s efforts to end the country’s catastrophic two-year civil war.

“The government of Tigray is prepared to participate in a robust peace process under the auspices of the African Union,” the TPLF’s statement read. “Furthermore we are ready to abide by an immediate and mutually agreed cessation of hostilities in order to create a conducive atmosphere.”

The TPLF’s announcement comes amid a series of high-level meetings between AU representatives and officials from both the TPLF and the Ethiopian government of Prime Minister Abiy Ahmed, who has opposed the rebels since late 2020. A fragile truce that had endured since March largely broke down in August, prompting a resumption of violence that the AU had attempted to end through new rounds of mediation.

The Ethiopian government did not immediately comment on the development. Addis Ababa has long insisted that the African Union mediate Ethiopia-TPLF talks—a process that the TPLF has refused to agree to until the present, citing concerns that the AU could be biased in its mediation. The international organization is headquartered in Addis Ababa, and its High Representative for the Horn of Africa, former Nigerian president Olusegun Obasanjo, is reportedly close to Abiy.

The TPLF’s statement made no mention of preconditions to a new truce. The group’s leader, Debretsion Gebremichael, had previously urged the implementation of a truce. Gebremichael has insisted on four conditions, most notably an end to the blockade of Tigray by the Ethiopian government and “unfettered humanitarian access” to prevent a burgeoning famine in Tigray and neighboring regions.

The TPLF has separately called for an end to the deployment of Eritrean troops within Ethiopia. Although Eritrea and Ethiopia have historically opposed each other, the two sides view the TPLF with hostility. Eritrean troops have also clashed with the TPLF and obstructed the flow of humanitarian aid to Tigray.

The statement also comes after Obasanjo’s reappointment for a second year as high representative, according to AU Commission Chairperson Moussa Faki Mahamat, the organization’s highest official.

“I reiterated my full confidence in him [and] encouraged his continued engagement with both parties [and international] actors to work towards peace [and] reconciliation in Ethiopia [and] the region,” Faki wrote on Twitter.

The AU leader also indicated that he had held talks with U.S. special envoy for the Horn of Africa Mike Hammer over the weekend.