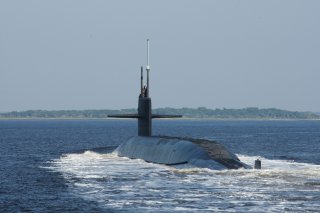 The U.S. Department of Defense has decided to ax the sea-launched nuclear cruise missile, known as the SLCM-N, instead opting to refurbish current stockpiles of nuclear weapons and rely on the Trident, a submarine-launched nuclear ballistic missile.

A fact sheet for the recently-published nuclear posture review, which outlines the United States’ nuclear capabilities, described the future of the U.S. strategic deterrence arsenal.

“The three legs of the U.S. Nuclear Triad are complementary, offering unique attributes that are mutually supporting. Given the uncertain and increasingly volatile security environment, the Nuclear Posture Review (NPR) concluded that a modern Triad possessing attributes of effectiveness, responsiveness, survivability, flexibility, and visibility remains necessary to deter strategic attack, assure allies and partners, and respond in the event of adversary attack.”

The National Defense Strategy, also published this year, is emphatic that the SLCM-N missile program will be canceled. The NDS explained that both the SLCM-N and the W76-2 were introduced “to supplement the existing nuclear program of record in order to strengthen deterrence of limited nuclear use in a regional conflict.”

However, “we reassessed the rationale for these capabilities and concluded that the W76-2 currently provides an important means to deter limited nuclear use. Its deterrence value will be re-evaluated as the F35A and LRSO are fielded, and in light of the security environment and plausible deterrence scenarios we could face in the future.”

This led to the conclusion that the “SLCM-N was no longer necessary given the deterrence contribution of the W76-2, uncertainty regarding whether SLCM-N on its own would provide leverage to negotiate arms control limits on Russia’s NSNW, and the estimated cost of SLCM-N in light of other nuclear modernization programs and defense priorities.”

The document summarized the position of the United States' nuclear deterrent succinctly. “Today,” the document explained, “much of the U.S. nuclear stockpile has aged without comprehensive refurbishment even as the geopolitical environment has deteriorated. To support Triad modernization programs, continued revitalization of the nuclear enterprise, including a strong and diverse workforce, is essential and requires continued, timely investments in science and production infrastructure.”

For now, it seems the United States will not pursue a naval nuclear cruise missile but instead focus on modernizing and refurbishing the capabilities it already has.