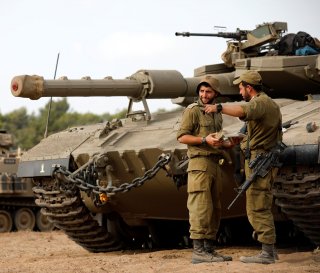 The Pereh was an Israeli guided missile carrier—disguised as a tank. This clever design was actually based around a tank hull, the older Magach tank, which is itself based on the American M48 and M60 family of heavy tanks. The crux of the oddball disguise was the turret. Though it appears to sport a full-length main gun, it is actually a ploy—the main gun is not used to fire tank shells. In actuality, the Pereh fired powerful anti-tank missiles—from the back of the turret.

In this disguise, the tank’s turret is somewhat enlarged to make room for Spike missiles. When the tank acquired a target, a missile would pop up from the back of the “turret” where a total of twelve Spike anti-tank missiles were stored. The tank’s bustle (the rear storage area on a tank turret) was also enlarged to accommodate stored missiles. This video shows a Pereh rolling down a road and most of the faux-turret can be seen.

The secretive project seems to have originated during the Yom Kippur war, when Israeli armor found itself in a precarious position against Egyptian armored formations. The project appears to have been a tightly-guarded secret. During the Second Lebanon War, several images of the Pereh popped up online, but were quickly suppressed by Israeli sensors. It wasn’t until around 2015 that the IDF, the Israeli Defense Forces, publicly acknowledged the existence of the deceptive system.

The Spike missile, manufactured by Rafael and the NLOS (Non-Line of Sight) variant has a respectable 25-kilometer range or nearly sixteen miles. As the Spike is a fire-and-forget missile, the operator does not need to guide the missile after firing.

The powerful missile can be launched from both land and air and has enjoyed a good deal of success on the international arms market. Most recently, the U.S. Army announced that it would use the NLOS Spike variant in tandem with their Apache helicopters. A number of North Atlantic Treaty Organization member countries also field the Spike missile.

It appears that the Pereh was officially retired from Israeli service in 2017, though this is difficult to confirm. Will the IDF pursue other deceptive, camouflaged platforms? Probably not publicly. Still, it makes for an interesting piece of battlefield deception.