Project 955A: This New Russian Submarine Is Ready to Rumble 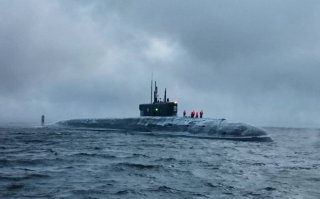 After completing its sea trials last month, the Russian Nav’s upgraded Project 955A Borei-class ballistic missile submarine Knyaz Vladmir is now ready to enter service with the Northern Fleet's 31st submarine division. The official handover to the Russian Navy is scheduled for June 12.

“The ceremony of raising the flag aboard the Knyaz Vladimir that will signify the underwater cruiser’s official inclusion in the Fleet’s combat structure is scheduled for June 12,” a source in the domestic defense industry told Russian state media this week. “The submarine will operate in the 31st submarine division.”

The improved Project 955A lead nuclear-powered submarine completed its state trails late last year, but the delivery to the Russian Navy was delayed after faults were discovered. Tass has reported that those faults were removed and that the submarine held its final trials in the White Sea on May 12-21 before returning to Severodvinsk. The acceptance/delivery certificate for the underwater cruiser—the nomenclature for very large submarines that are designed to remain at sea for extended periods of time—was signed on May 28.

The Knyaz Vladimir—named for Prince Vladimir the Great of Novgorod and ruler of the Kievan Rus from the late tenth and early eleventh centuries—is the first of the advanced iteration of the Borei-class Project 955A. The strategic missile-carrying underwater cruiser represents the fourth generation of nuclear-powered subs built for the Russian Navy. It was floated out in November 2017, and the submarine was designed to be less noisy, while it features improved maneuvering, depth and armament control systems.

This new submarine will certainly bolster the Russian Northern Fleet’s submarine force. Currently, the Project 955 (Borei) lead submarine Yuri Dolgoruky along with the Project 667BDRM (Delfin-class) subs developed during the Soviet period are operational in the 31st division of submarine forces. Many of those submarines date back to the 1980s and are “becoming increasingly harder and more expensive to maintain with incremental updates.”

The Knyaz Valdimir has been seen as a major step forward in the Northern Fleet's modernization efforts. However, despite the age of those older submarines, all Borei-class submarines are armed with 533mm torpedo tubes, but the real striking power is in the sixteen Bulava ballistic missiles each carries. The missile boasts a 550 kiloton warhead and has an effective range of up to ten thousand kilometers.

As with the nuclear-powered ballistic missile submarines (SSBNs) operated by the United States, China, France, the United Kingdom and India, the primary purpose of the Borei-class is to bring ruin to an adversary’s cities, even if other nuclear forces are whipped out in a first strike. This is why the Russian Navy has sought to make the Bulava-equipped Borei underwater cruisers the cornerstone of its nuclear submarine-launched ballistic missile deterrent force for decades.