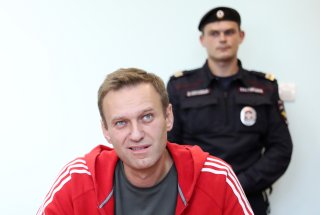 Russian opposition leader Alexei Navalny, who has been imprisoned within Russia since January 2021, claimed on Thursday that Russian authorities had charged him with promoting “terrorism and extremism,” charges that could effectively triple his prison sentence if he is convicted.

“I received an official notification that a new criminal case has been initiated against me for propagating extremism, calling for terrorism, financing extremist activity and rehabilitating Nazism,” Navalny wrote on Thursday. He claimed in the statement that he could face a cumulative sentence of thirty years following the new charges, including his current nine-year prison term. Russian authorities did not immediately acknowledge the new charges against Navalny.

The imprisoned dissident’s spokeswoman, Kira Yarmysh, claimed that the new charges were related to a YouTube channel overseen by several of Navalny’s associates and former employees called Popular Politics. That channel was launched in 2022, after Navalny had already been imprisoned for a year, raising questions about how he could have participated in its operations. Navalny himself commented on the disparity in his Twitter post, sarcastically claiming that his ability to conduct illegal activities from prison showed that he was “a master of the underworld” and comparing himself favorably to Professor Moriarty, the nemesis of Sherlock Holmes.

“You all thought I had been isolated in prison for two years, but it turns out I was actively committing crimes,” Navalny wrote. “Luckily, the [Russian] Investigative Committee was vigilant and didn’t miss a thing.”

Arguably the most prominent leader in Russia’s opposition movement, Navalny rose to fame in the mid-2010s after he conducted an unexpectedly successful campaign for the mayor of Moscow, challenging longtime Putin loyalist Sergey Sobyanin. Although he lost the election, he gained nationwide attention in its aftermath, founding the Anti-Corruption Foundation to expose bribery and theft among high-ranking Russian officials. After he was poisoned in mid-2020 with Novichok, a Russian nerve agent associated with the country’s spy agencies, Navalny traveled to Germany for medical treatment. Following his return to Russia, he was arrested and later convicted of embezzling funds from the Anti-Corruption Foundation and his political campaign fund. Navalny and his lawyers have always denied the charges, claiming that they were fraudulent and imposed as a means to silence his opposition to the Kremlin.

Although he has remained in prison since his initial arrest in 2021, Navalny maintains an active presence on social media through his lawyers. He has also continued to speak out against Russia’s invasion of Ukraine from prison, claiming during a court hearing that the war was “stupid” and “built on lies” from Putin and his inner circle.