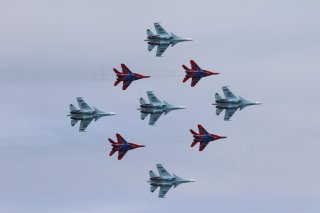 Russia’s Black Sea fleet eliminated a notional enemy warship during scheduled drills, according to a statement issued by the fleet’s press office on Thursday. “Under the scenario of the drills, a notional enemy surface ship with a subversive group on its board was spotted in the Black Sea,” read the statement. Four Su-30SM fighters, two Su-24M attack aircraft, and Bastion-P coastal defense missile systems mobilized to engage the notional attacker played by the Krivak-class frigate Ladny.

“A group of quick reaction alert aircraft from the Black Sea Fleet’s naval aviation and air defense forces was scrambled to accomplish the task of jointly destroying the target while the teams of Bastion coastal defense anti-ship missile systems stationed on the Crimean Peninsula conducted a march to the missile launch area and readied the missile systems for employment," the Black Sea fleet’s press office continued. The drills were split into two distinct phases: Participating aircraft practiced strike sorties followed by “electronic launches” from coastal Bastion launchers.

The drills seem to reflect ongoing Russian concerns about a potential Ukrainian naval “provocation” in the Black Sea region. Earlier in December, Russia’s Federal Security Service (FSB) alleged that Ukrainian Navy command ship Donbas attempted to enter the Kerch Strait without requesting permission from Russian authorities. Ukraine’s military and the ship’s crew rebuffed the FSB’s allegation, claiming that the Donbas was performing routine exercises and had no intention of crossing the strait. The crisis was defused after the Donbas changed course, sailing away from the Kerch Strait.

The incident marks one of the most significant Russian-Ukrainian maritime confrontations since November 2018 when Russia’s Coast Guard fired at and captured three Ukrainian Navy vessels attempting to sail through the Kerch Strait.

Russia annexed Crimea shortly after the 2014 Euromaidan revolution in Ukraine, claiming control over the territorial waters off the Crimean Peninsula. The Black Sea region has since been a site of rapidly escalating military tensions between Russia and NATO. In June, Russia’s Coast Guard reportedly fired warning shots and dropped bombs in the path of British Type 45 destroyer HMS Defender to chase the vessel away from Russia’s claimed waters off the Crimean coast. Russian president Vladimir Putin later suggested that the Russian Navy could have sunk the Defender without triggering a major war because, in his words, the West knows it cannot win such a conflict.

The Russian Defense Ministry announced on Tuesday, without providing any additional details, that it is tracking French Navy frigate Auvergne after it entered the Black Sea.