Is Russia Getting Ready to Buy Stealth Su-75 Checkmate Fighters? 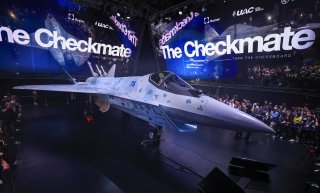 Russia’s new, fifth-generation “Checkmate” fighter jet was introduced in July as an export product, but there appears to have been a change of plans.

Deputy prime minister Yuri Borisov told reporters at an economic forum in Siberia that Russia’s defense ministry could procure the Checkmate fighter under a future state armament program. “Under a future state program for armaments the Defense Ministry and the Aerospace Force may consider the possibility of purchasing this fighter,” he said. Borisov’s surprise announcement comes despite the fact that the Checkmate was promoted by parent company Rostec as a product intended exclusively for export purposes. Borisov justified the prospective procurement as a kind of business investment. “This is a major export potential factor,” he explained. “Foreign customers are always keen to know if the country’s national armed forces use the military technologies that are on offer for export.” Borisov’s reasoning mirrors what Rostec officials have previously said about the Sukhoi Su-57, which is another Russian fifth-generation stealth fighter jet that is also struggling to court foreign demand. Borisov noted that Russia’s military brass has been “historically cautious” about single-engine fighters, believing their twin-engine counterparts to be more reliable, but that the former is widely used by foreign air forces from China to the United States.

The Checkmate was introduced as a single-engine, single-seat light fifth-generation multirole stealth fighter, reportedly capable of reaching speeds of up to nineteen hundred kilometers per hour with a combat radius of fifteen hundred kilometers. In keeping with its multipurpose role, it boasts a diverse suite of air-to-air and air-to-ground missiles, as well as rockets and guided/unguided bombs, that can be carried in a combination of internal and external bays. The Checkmate offers a glass cockpit with a broadly similar layout to that of the Su-57, as well as an artificial intelligence-powered “Matryoshka” logistics support system that promises simple and cost-effective maintenance cycles. These specifications and features are standard fare for a no-frills, workhorse fifth-generation fighter, but what truly set the Checkmate apart from its competition is its staggeringly low per-model cost of $25-30 million. This suggests that the Checkmate is very favorably priced against competing offerings like the Dassault Rafale. Why, then, are there apparently no takers as of now? It could be, as Borisov noted, that foreign air forces are reluctant to commit to a fighter jet that is not flown by Russia’s own military. One of the most successful Russian export fighters in recent decades, the Su-30, was conceived as a development of the popular Su-27 fighter, giving potential buyers a degree of confidence in the level of performance and reliability that they can expect. But the Checkmate is based on a principally new aircraft design, with all of the first adopter risks that could entail.

Russian officials previously said the Checkmate is being primarily marketed to India and Vietnam, and Africa, though Rostec’s initial promotional materials also targeted Argentina and the United Arab Emirates. Despite looming concerns over lagging foreign interest in the new fighter, Borisov reiterated the delivery projections previously offered by Russian officials. “As far as I know, the beginning of flight tests is scheduled for 2023. Mass production (on the condition of sufficient demand) may begin in 2025-2026,” he said. “This deadline is quite realistic.”