Russia Wants to Sell Some of Its Most Deadly Cruise Missiles to Vietnam, China and India 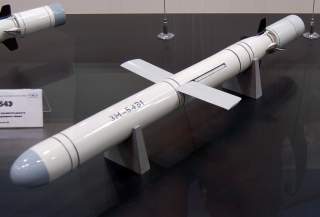 Moscow is hoping to export its Kalibr cruise missile-armed Project 22800 Karakurt corvettes to Vietnam, China, India and others according to Russian officials. However, if the Kremlin does choose to export the vessel and its Kalibr cruise missile armament, it might find itself in contravention of the Missile Technology Control Regime, which is a voluntary understanding among 35 states—including Russia—to limit the proliferation of missiles and missile technology.

“They have a big tonnage, good armament, and Kaliber is the most important thing. The corvette has an acceptable price, it is small, compact and fast. I believe that it has a good export potential for a number of countries, especially from the Asia-Pacific Region - Vietnam, China, India and others."

The problem for Russia is that other than India, the rest of the countries mentioned by Borisov are not members of the MTCR agreement. Thus, sale of “rockets and unmanned aerial vehicles capable of delivering a payload of at least 500 kg to a range of at least 300 km and on equipment, software, and technology for such systems” to non-MTCR nations are frowned upon. Even exports to MCTR partner nations are discouraged.

“MTCR Partners have explicitly affirmed that membership in the Regime provides no entitlement to obtain technology from another Partner and no obligation to supply it,” the MTCR website states.

“Partners are expected to exercise appropriate accountability and restraint in trade among Partners, just as they would in trade between Partners and non-Partners. Partners are bound by a ‘no-undercut’ policy to consult each other before considering exporting an item on the list that has been notified as denied by another Partner pursuant to the MTCR Guidelines.”

There are exports versions of the 3M-54 Kalibr that have ranges that fall just under the 300km range threshold that Russia has previously marketed under the name “Club,” but Borisov specifically referred to the domestic Kalibr variant which has a much greater range of about 2,500km. Indeed, as Borisov said, the Kalibr missile is the ship’s main selling point. Also of note, India, China, Vietnam, Iran and Algeria already operate the 3M-54E Club version of the weapon.

However, compliance with the MCTR is completely voluntary—even if arms control experts consider adherence to the agreement to be an important international norm.

“There are no legally binding obligations imposed on MTCR Partners,” MTCR website states.

“However, Partners are expected to act responsibly and practice restraint with regard to exports of items that could contribute to the proliferation of missiles capable of delivering WMD and to abide by all consensus decisions of the Regime. They set the standard for responsible non-proliferation behaviour and help shape the international missile non-proliferation effort while conducting their missile non-proliferation policies in a manner consistent with the Regime’s overall goals and activities. Partners also are expected to control all exports of equipment and technology controlled on the MTCR Annex according to the stipulations of the MTCR Guidelines.”

The United States does, however, impose sanctions on some nations who violate the MTCR.

“U.S. law mandates that Washington sanction entities-individuals, companies, or governments (whether they are MTCR members or not)-exporting MTCR-controlled items to certain countries identified as proliferators or potential threats to U.S. security,” writes Kelsey Davenport, director for Nonproliferation Policy at the Arms Control Association.

“Sanctions may also be levied if the United States judges the transfer contrary to the MTCR. Typically, Washington prohibits the charged entity from signing contracts, receiving aid, or buying arms from the U.S. government for a period of two years. Sometimes the penalties can be imposed for longer lengths of time or extended to commercial imports and exports as well.”

Kalibr: Russia Has Its Very Own 'Tomahawk' Missile