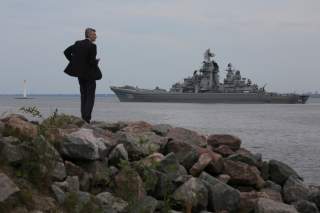 Russian Navy officials are claiming that they will complete detailed design work on the new Leader-class nuclear-powered guided missile destroyer by 2022, after which point the vessel will be built.

However, analysts continue to remain skeptical about Russia’s prospects of building the massive new vessels, which have been estimated to displace anywhere from 10,000-tons up to as much as 18,000-tons. Indeed, the Leader-class reportedly does not appear in Russia’s State Armament Plan (GPV) 2020-2017, which suggests that the vessel is very unlikely to be built.

“As for Leader-class destroyer, we plan to launch the development of technical design in 2019-2020. We plan that the technical design of the ship will be ready in around 2022, after which it will be laid down," Vice Adm. Viktor Bursuk, deputy commander-in-chief for armaments for the Russian Navy, told the state-owned TASS news agency.

“The shipbuilding program provides for the construction of this vessel.”

The massive Leader-class “destroyer”—if it were ever to be built—would be a 18,000-ton vessel designed to replace the Slava-class cruisers, Sovremennyy-class destroyers as well as the Udaloy I class anti-submarine ships.

While smaller than the massive Project 1144 Orlan class—also know as the Kirov class—nuclear-powered battlecruisers, the vessels would carry a much heavier armament as well much more capable sensors.

Altogether, the ship would carry more than 200 missiles. The vessel’s armament would be rounded out with the Pantsir-M missile and gun system as well as a 130-mm A-192 cannon.

Were the Leader-class ever developed, built and fielded, it would be a formidable vessel—possibly the most formidable enemy ship the United States Navy might ever faceoff against.

And indeed, in some regards, Russia does have an eventual requirement to develop a replacement for its remaining Kirov and Slava class cruisers. However, the Leader exists only on paper and bringing such a large and sophisticated vessel into fruition is extraordinarily expensive and Russia does not have the resources to dump into what amounts to be a large-scale vanity project.

The modern Russian surface fleet is less about warfighting capability than it is about projecting to the rest of the world that Moscow is still a great power. Indeed, as Center for Naval Analyses research scientist Michael Kofman wrote, large Russian surface ships such as Kirov-class Peter the Great and the carrier Admiral Kuznetsov exist primarily to project status rather than power.

“For the past two decades, the Russian Navy’s principal purpose has been status projection, showing the flag to demonstrate Russia as a great power outside its land boundaries,” Kofman wrote. “Squadrons of two or three ships—sometimes including the Petr Velikiy—typically would undertake port visits or exercises, always with a tanker and a tug in escort, given the frequency of breakdowns among Soviet-era ships.”

Further, not only do the Russians not have a genuine need for such a large and impractical vessel, as the proposed Leader-class would be, it is unlikely that the Russian shipbuilding industrial base could support the construction of such a ship. “Sovremennyy- and Udaloy-class destroyers (Project 1155) are unlikely to be replaced with the much-vaunted Lider-class destroyer (Project 23560E),” wrote Richard Connolly and Mathieu Boulègue, at the Chatham House Royal Institute of International Affairs.

“Given the limitations of the Russian shipbuilding industry, such large-scale projects are unlikely to take place over the next decade. Instead, it is more likely that production of an augmented Gorshkov-class frigate – a ‘Super Gorshkov’ – will begin as shipbuilders adapt existing designs.”

As both Kofman and his Center for Naval Analyses colleague Dmitry Gorenburg have written, given the Russian Navy’s decreased priority in the GPV 2020-2027, there is a far better chance that the Kremlin will order the Super Gorshkov frigates rather than build the Leader.

“I have grave doubts that we will see construction start this decade, and there’s a decent chance that these ships won’t be built at all, given their high cost and the reduced priority the Navy will receive in the new State Armament Program that is expected to be approved later this year,” Gorenburg wrote.

Given the evidence, it is likely that while the Russian Navy might wish to build the Leader-class, it is very unlikely that the project will be approved by the Kremlin given the vessels’ cost and the state of Russia’s shipbuilding industry. It is simply not worth it for the Kremlin to invest in a 18,000-ton monstrosity that would cost billions of dollars a piece for what essentially amounts to a presence mission. If Russia does build a new surface warship design, it will likely be this new Super Gorshkov-class vessel.