The Russian Defense Ministry Is Showing Off Some Truly Terrifying Weapons 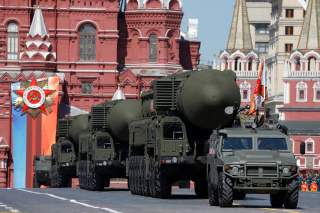 The new Russian footage was released just days after Putin met with U.S. President Donald Trump in Helsinki during a summit on July 16.

The Russians appear to be posturing ahead of future potential arms control talks with Washington.

"The US will have to take account of the reality that has emerged, of the new armament system we’ve developed," analyst Andrei Bystritsky, a member of the Valdai international discussion club, told the state-owned TASS news agency.

"While conducting talks the US will have to bear in mind this factor does exist."

One of the highlights of the Russian Ministry of Defense footage was of the Kinzhal-armed MiG-31K Foxhounds training alongside Tupolev Tu-22M3 Backfire bombers.

The Kinzhal-equipped MiG-31K squadron armed went on “experimental combat duty” in Russia’s Southern Military District from Dec. 1, 2017, and has been flying patrol around the Caspian Sea since April.

"The squadron’s flight personnel and the engineering and technical staff are successfully mastering new aircraft and armament and improving their skills in preparing and accomplishing combat training missions, including with the conduct of practical launches. Over this period, more than 350 flights have been performed, of which 70 have been carried out with mid-air refueling," Dronov said.

Meanwhile, the Russians are preparing for additional tests on the 200-ton Sarmat now that the weapon has completed ejection trials.

The next step for the Sarmat is flight-testing.

"The program of the system’s pop-up tests has been completed with the positive results, which makes it possible to switch to preparations for the flight trials of the Sarmat missile complex," the Russian Defense Ministry said.

“All the measures that have been carried out allow for making a clear conclusion that the Sarmat missile system will be created and placed on combat duty within the scheduled timeframe."

The Russians showed off what appears to be a prototype of the Poseidon long-range nuclear-powered nuclear-tipped torpedo, formerly known as the Status-6, which is reality seems to be more of a small robotic submarine.

“It certainly is a threat U.S. forces will need to take into account,” Bryan Clark, a former U.S. Navy submarine officer and current senior fellow at the Center for Strategic and Budgetary Assessments told The National Interest earlier in the year.

“It is large enough to carry a megaton-class nuclear weapon, although the 100 MT weapon they advertise may be too heavy. Torpedoes are generally negatively buoyant due to the weight of the engine and warhead and the lack of space for ballast tanks like a submarine would have. A really heavy warhead in this vehicle would make it difficult to control in depth without going very fast and using control surfaces to stay at depth—like an airplane. I don’t see control surfaces that would enable that approach here.”

The Russians also showed off a new video of the Avangard hypersonic glide vehicle. Though most analysts are skeptical, the Russians claim that the weapon will be operational next year.

Moscow claims that a production contract for the Avangard weapons has already been signed and that the weapon could go on alert as soon as next year.

"After the first series of glide vehicles is produced and a controlling launch of a missile with this armament is carried out successfully, the Avangard complex may be accepted for service already in late 2018,” a defense source told the TASS news agency .

“At the latest, it will be accepted for operation and placed on high alert in 2019."

The Russians also showed of footage of their nuclear powered cruise missile. The weapon has been tested several times, but had failed to fly properly in every case thus far. Part of the reason the Kremlin is pursuing these new weapons—apart from genuine concern about American missile defenses—is the Russian military industrial complex, which is perpetually in search of new projects. In the case of these weapons, the Russian defense and nuclear energy industries played a large role in convincing the Kremlin to proceed—and by some estimates, Russian industry might have had the dominant role.

“As here in the U.S.—indeed, everywhere—that’s tough to break out,” Olya Oliker, senior adviser and director of the Russia and Eurasia Program at the Center for Strategic and International Studies, told The National Interest earlier this year.

“Everyone always looks to justify their program with whatever the threat is. In many, if not most cases, they truly believe that their pet program is the right response to the threat. At the same time, services and individuals have relationships with defense industry, which also feeds into this dynamic.”