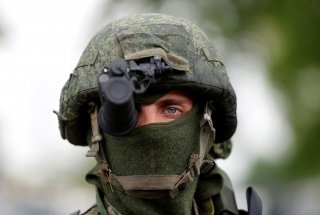 The Russian military has conducted drills and exercises regularly in recent months, and last week engaged in three separate training maneuvers, state media reported. This included anti-submarine warfare operations against simulated targets in the Barents, which were conducted by the Northern Fleet’s warship Severomorsk; while nearly a dozen aircraft from the Baltic Fleet’s naval aviation wing took part in strikes against a notional enemy’s amphibious assault ship.

The latter drills were held at Baltic Sea naval ranges amid NATO’s ongoing Baltic Operations or Baltops 2020 exercise in the region. It is the 49th iteration of the exercise, and about 30 warships and up to 3,000 personnel from 17 NATO allies and two partner countries are taking part. It will conclude on Tuesday.

The Russian maneuvers were likely meant to be a clear counter demonstration and show of arms to the NATO drills.

The strikes were also supported by a wing of Su-27 Flankers, a Cold War era jet fighter that was designed as a direct competitor to the American F-14 and F-15 families of aircraft.

“The pilots performed flights to the designated sea area to reconnoiter the maritime situation and also carried out training attacks against the targets that simulated a group of the notional enemy’s ships,” the Baltic Fleet Press office added. “Overall, the planned measures involved over ten aircraft of the Baltic Fleet’s naval aviation.”

The Russian military conducted additional drills, likely to highlight how it could respond to multiple threats simultaneously.

The crew of the Northern Fleet’s large anti-submarine warfare ship Severomorsk took part in artillery and missile firing against simulation targets in the Barents Sea at the combat training naval ranges that were closed to shipping. The crew also practiced jamming and setting up decoy targets with the aid of electronic warfare systems.

“The ship’s crew practiced a naval battle with a notional enemy and delivered fire against a towed sea screen with the AK-100 main caliber artillery system,” the Northern Fleet’s press office told state media. “The ship also employed the Kinzhal anti-aircraft missile system that can be used both against air and fast-moving surface targets.”

The drills in the Barents Sea came just days after more than ten Russian vessels from the Northern Fleet tracked the movement of the French guided missile frigate Aquitaine, a highly automated warship that is capable of carrying out various missions including anti-air and anti-submarine warfare. It was just the most recent “visit” by NATO warships to the region in the past two months—as U.S. and British warships were deployed to the Barents Sea for the first time since the Cold War.

According to the press office of the Russian Western Military District, those exercises involved the combat teams of S-400 “Triumf” anti-aircraft missile systems that simulated the hypothetical enemy. The anti-aircraft gunners intercepted the targets and made electronic missile launches.

Russia clearly meant to highlight that it could “up its game” on multiple fronts should it be required to do so.