Russia's New Submarines Are Dangerous. But How Would They Be Used in War? 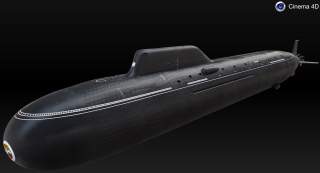 It’s no secret that the Russian navy is investing heavily in new classes of submarines, even while overall Russian military spending flatlines amid a wide economic crisis. But it’s less clear exactly what the Russians intend to do with potentially dozens of modern submarines in the event of war.

Western analysts should think creatively in order to suss out the Kremlin’s undersea intentions, Norman Polmar, a leading American naval analyst, wrote in Proceedings, the professional journal of the U.S. Naval Institute.

“Submarines appear to have a high priority in Russia’s current efforts to rebuild its armed forces,” Polmar wrote in the October 2019 edition of Proceedings. “How will the submarines most likely be employed? The answer must be determined by thinking outside the box.”

Where the Russian navy is all but abandoning the production of new aircraft carriers, cruisers and other “blue-water” surface warships, it has recommitted to sustaining a large fleet of big, long-range submarines.

“Although the navy is mainly made up of Soviet-era surface ships and submarines, an extensive modernization program is underway, focusing first on the submarine force,” the U.S. Defense Intelligence Agency reported in 2017. “Progress in submarine modernization is underway.

As recently as 2017, the Russian fleet operated 61 submarines. “Historically the backbone of the Russian navy, 75 percent of the 61 operational submarines are over 20 years old and are slowly being replaced,” the DIA explained.

“Russia will continue production of its fourth-generation Dolgorukiy-class submarines through 2020,” the DIA reported. “There are currently three in service, with an additional eight scheduled to enter service in the coming years.”

The first of up to 10 Yasens was delivered to the navy in 2014, “but the program has encountered delays,” the DIA noted. “The flagship of the class (hull one) required 16 years to complete; hull two should soon be completed after seven years.”

The improved Kilos, by contrast, have speeded through production “without significant delays,” according to the DIA. “The initial order of six was expanded to 12 in early 2016. The first three Kilos were delivered to the Black Sea Fleet in 2014 to 2015.”

Assuming budgets remain at their current level, in the 2020s the Russian submarine fleet could include the 11 Boreis, 10 Yasens and 12 improved Kilos plus a couple dozen older submarines including early-model Kilos, the one-off experimental diesel boat Petersburg plus upgraded Akula, Oscar and Sierra attack submarines, for a grand total of probably fewer than 50 vessels.

It costs Russia around a billion dollars to build a new nuclear submarine. An American sub, by contrast, costs around $2 billion. But the Russian military budget is around $70 billion annually. The U.S. defense budget tops out at around $700 billion.

With its tenfold spending advantage, the U.S. Navy aims to maintain a fleet of around 50 attack submarines, roughly the same number the Russians possess. The cash-gap underscores the importance of submarines to Russian defense planning.

But Western analysts risk understanding exactly why the Russian subs matter. After all, they’ve erred before, Polmar explained. “In the past, Western intelligence often got it wrong with respect to Soviet submarines,” he wrote.

The massive Soviet submarine force peaked at almost 400 units during the Cold War, and throughout those 45 years the West feared those undersea craft would be employed to sever the sea lines of communication connecting the United States and Western Europe.

Thus, as intelligence sources detected the Soviet Union producing hundreds of submarines—obviously to fight the “Third Battle of the Atlantic”—the U.S. Navy and other NATO navies responded with massive investments to protect the ocean convoys that would carry troops, weapons, bombs, bullets and fuel from North America to Western Europe.

Germany in 1939 had begun World War II with just 57 U-boats and had threatened to sever the oceanic ties to Britain; the Soviet order of battle—according to U.S. intelligence—could begin a war with hundreds of undersea craft.

But the Soviets never actually planned to carry out large-scale attacks on merchant shipping, Polmar explained. Instead, Soviet doctrine called for submarines to focus on nuclear deterrence and attacks on NATO submarines and aircraft carriers.

That mission-focus became evident in the late 1970s when new intelligence sources became available. The CIA in 1978 circulated a top-secret report, “The Role of Interdiction at Sea in Soviet Naval Strategy and Operations,” which revised downward the threat Soviet subs posed to NATO shipping.

“The number of merchant ships likely to be sunk over an extended period—four months—indicates that the Soviets have only a limited capability to impair the flow of shipping across the Atlantic, even if they were to reorder their priorities and allocate large forces to interdiction,” the CIA noted.

The Russians are building submarines again. It’s important for Western experts to understand why. But if analysts misread Soviet intentions during the Cold War, they risk misreading Russian intentions now, Polmar warned. “The men and women who collect, analyze and provide that intelligence must be more efficient than those dedicated personnel who, in the Cold War, got it wrong with respect to the Soviet navy.”