Savage Arms – This Gun Maker Made Some Serious History 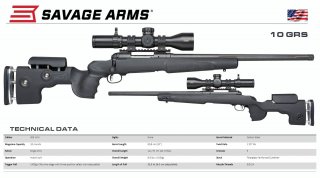 Westfield, Massachusetts-based Savage Arms sounds like it could take on a wild world, and the company is well known for its discontinued Model 99 lever-action rifle—a hammerless rifle that was produced from 1899 to 1998. That rifle, which was the first lever-action to use spitzer/pointed bullets, was extremely popular with big game hunters, but was even adopted by the Montreal Home Guard during World War I, highlighting its reliability and stopping power.

Founded by Arthur Savage in 1894, who had received a patent for a repeating rifle with a single column magazine in 1891, the company has remained a top brand with hunters to this day. Not as well known today are the close ties the company has had with the U.S. military. During World War I, Savage Arms produced small arms including the Lewis Gun; while during the Second World War the company manufactured the Thompson submachine gun, the M1919 .30 caliber and M2 .50 caliber Browning machine guns, and even Lee Enfield rifles for the British Army.

What Could Have Been

What is also largely forgotten is that the U.S. Army also seriously considered the Savage Arms Model 1907 as its standard sidearm. In the late nineteenth and early twentieth centuries, the U.S. Army was equipped with the Colt New Army & Navy revolver, chambered in .38 long Colt caliber. It had been adopted in 1892 and while it was a step forward, the weapon—and particularly the round—performed dismally against the Moro tribesmen in the Philippines. As a result the Army was forced to re-adopt the 1873 Colt Single Action Army in .45 Colt as it had more stopping power.

The U.S. Army needed a new handgun and fast. As The National Interest previously reported, “Before the tests began in earnest, the Army rejected most of the entrants as unsuitable and focused mainly on the Colt, Luger, and Savage pistols.”

The fact that Savage Arms was even in the running was a big deal, given that it had been around for just a little over a decade.

Yet, after some delays, the pistol trials began in January 1907. Even from the beginning, Colt's entry enjoyed an advantage. The Colt Company had existed since 1848 and had supplied revolvers to the Texas Rangers, U.S. Army, and U.S. Navy since the Civil War. In the end the John Browning designed Colt M1911 .45 pistol was selected. However, Savage still marketed a series of pistols based on the patents for its .45 caliber prototype—and just as the M1911 was eventually produced in a variety of calibers so too were the Models 1907/1915 and 1917.

Return To Its Roots

In recent decades Savage Arms has returned to its sporting gun roots and produced a series of bolt-action rifles, but it has also remained centered in the modern sporting rifle market. Savage has also been unique in producing specialty guns—notably for left-handed shooters.

While the company had been a subsidiary of Vista Outdoor Group beginning in 2013 it was spun off in 2019.

"Divesting our Savage brand was a key aspect of our transformation plan," said Chris Metz, chief executive officer of Vista Outdoor in a July 2019 statement.

"While it was a difficult decision to sell such an iconic brand, I remain confident that this was the correct choice to help Vista Outdoor grow in those categories where we can have leadership positions," Metz added. "Savage is a fantastic business, and it deserves to continue to evolve into other firearms categories. At this time, however, we simply do not have the resources to transform Savage into the full-service firearms company that it deserves to be and, therefore, we determined the brand would be better off with a different owner. We're excited to see Savage reach its full potential under new ownership."