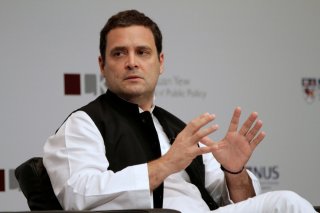 Rahul Gandhi, the former leader of the Indian National Congress (INC), India’s largest opposition party, was questioned by Indian authorities on Monday for his alleged involvement in a bribery scandal alongside his mother and current INC leader Sonia Gandhi.

The two Gandhis were questioned in relation to a nine-year-old complaint filed by Subramanian Swamy, a member of the ruling Bharatiya Janata Party (BJP). The complaint accused them of jointly forming a shell company and illicitly acquiring $300 million in property and assets that had formerly belonged to an INC-linked holding company famous for its publication of the National Herald, a colonial-era newspaper that strongly advocated for Indian independence while the country was under British rule. The National Herald was founded in 1937 by Jawaharlal Nehru, Sonia Gandhi’s grandfather-in-law and Rahul Gandhi’s great-grandfather.

The two Gandhis have contested the charges and the INC has claimed that they are politically motivated. INC spokesman Randeep Singh Surjewala vowed that the party would “fight fearlessly” and that the lawmakers would “answer every question” until their innocence had been determined.

The questioning caused significant disturbances in New Delhi, India’s capital, on Monday as INC lawmakers and thousands of the party’s supporters accompanied the younger Gandhi to the Enforcement Directorate of India’s Finance Ministry, where the questioning took place. The questioning lasted most of Monday and is scheduled to resume on Tuesday. While it took place, Gandhi’s supporters protested outside the building, leading to several arrests.

The Indian National Congress is closely associated with Nehru, who led the struggle against British rule during the first half of the twentieth century alongside Mohandas Gandhi. Following India’s independence in 1947, Nehru served as the new country’s first prime minister, remaining in the post until 1964. Although Nehru’s successors proved more controversial, including his daughter Indira Gandhi—who briefly assumed dictatorial powers during the 1970s, and whose rule was marked by human rights abuses and discontent between India’s ethno-religious groups, culminating in her assassination in 1984—the INC has consistently remained one of India’s two largest political parties since the country’s founding.

However, its role in Indian politics has been marginal since 2014, when the BJP under current prime minister Narendra Modi won a supermajority in India’s parliament. Although the BJP has been criticized for its right-wing and Hindu nationalist ideology, and members of the party have repeatedly caused controversy for anti-Muslim stances, the party repeated its electoral success in 2019 and remains widely popular within India.