Shocking: China and the CIA Both Helped Saudi Arabia Get Their Own Ballistic Missiles 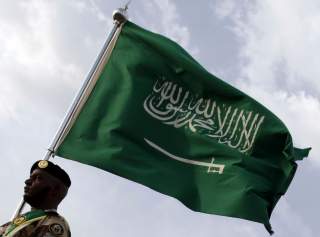 Key point: Saudi Arabia wanted long-range missiles and it got them. It turns out that when you really want something, you don't care who helps you.

You would be hard pressed to find two more determined foes of Iran other than Saudi Arabia and Israel. The latter country has long been perturbed by bellicose anti-Israeli rhetoric from Tehran, and has unleashed hundreds of air strikes and artillery bombardments targeting Iran’s efforts to arm Hezbollah forces in Lebanon and Syria.

Meanwhile, Riyadh appear to see itself as engaged in nothing short of an epic struggle for dominance of the Middle East, and has oriented its foreign policy around combating the perceived Iranian menace, even in places its influence is moderate at best.

Iran hawks are preoccupied by the possibility of an Iranian nuclear weapon—a weapon which, given the limitations of Tehran’s air and sea forces, would need to be delivered by a ballistic missile. Iran’s continuing development of such missiles has been proposed as a casus belli, and was cited to justify the U.S. withdrawal from a nuclear deal struck in 2014 (the deal constrained Iran from developing nuclear warheads, but not ballistic missiles to carry them in). It’s often ignored that Israel and Saudi Arabia themselves maintain some of the largest ballistic missile arsenals in the region—the latter of which is the subject of this article.

Iran’s ballistic missile program began during the ‘War of the Cities’ phase of the devastating Iran-Iraq war, when Baghdad rained hundreds of Scud missiles on Iranian metropolises. Though Iran managed to acquire a few Scuds from Libya with which to retaliate against Iraqi cities, it mostly could only strike back with air attacks—which placed its steadily diminishing fleet of U.S.-built warplanes at risk.

Saudi Arabia was also growing nervous of Iraq’s evidently huge missile arsenal. Denied access to U.S. ballistic missiles, Riyadh instead went knocking at the door of Beijing—which had previously proven willing to export arms to Iran when Moscow and Washington refused to do so.

Just four years later, Riyadh did end up in a war with Baghdad, and forty-six Iraqi missiles did fall upon Saudi territory. Yet Riyadh never bothered flinging missiles back at Baghdad. Why?

The problem with the DF-3 is that it has a Circular Error Probable of at best 300 meters. This means that if you fired a half-dozen at a given target, you could expect on average only three to land within the length of three football fields of the aim point; with the other three most likely falling further afield. Other sources claim the CEP may even be as large as one or two miles.

A weapon that inaccurate is pretty much useless for striking a military target—unless equipped with a nuclear warhead, which is what the DF-3 was designed to do.

But China wasn’t going to sell nukes to the Saudis. The DF-3s were instead modified to carry 3,000 pounds of high explosives. This meant the Saudi DF-3s were only ‘useful’ for dropping high explosives on a target as large as a city and randomly killing whatever unlucky civilians happened to be nearby the point of impact. However, the abundant firepower of U.S. war planes during the Gulf War meant the Saudis felt little need for such tactics.

Over a decade later, Riyadh grew interested in acquiring a more effective strategic missile deterrence, and again turned to China—this time seeking its much more accurate DF-21 IRBM, which has a CEP of only 30-meters. (China even developed a guided DF-21D model designed to hit large ships at sea.) Furthermore, the DF-21’s use of solid-fuel rockets means it can be launched on very short notice.

Though possessing a shorter range of 1,100 miles, the 30-ton missile is perfectly adequate to hit targets throughout the Middle East and would be difficult to intercept as it plunges towards its target at ten times the speed of sound. Reportedly Saudi launch sites were photographed oriented for firing at Iran and Israel, though given the increasingly less discrete alliance between Riyadh and Tel Aviv in recent years, that latter part may be more for show.

In 2014, Newsweek exposed that the CIA had actually helped broker the sale of Chinese missile to Riyadh—as long as it was established that the DF-21s did not have nuclear warheads. Thus, after a series of covert meetings in Washington DC-area diners between spooks and Saudi officials, in 2007 two CIA agents were dispatched to inspect the missiles in their shipping crates before they were transferred into Saudi possession.

Saudi Arabia has reportedly never test-fired its missile arsenal, however, leaving the operational readiness of the RSSMF open to question. Nonetheless, it has maintained four or five underground facilities to house the weapons. Finally, in April 2014, as Riyadh grew fearful of U.S. rapprochement with Iran due to the nuclear deal, it paraded the gigantic missiles publicly.

The thing with a ‘deterrent’ weapon system is that, though they need to appear to be a credible threat, they only serve their primary purpose if they scare a foe into avoiding hostilities. However, that deterrence can’t happen if the adversary isn’t well aware of the extent of that threat due to secrecy, which may explain the Saudi decision to begin prominently trotting the rockets out in full view.

There are also persistent rumors that Riyadh has acquired a small quantity of nuclear weapons from Pakistan, or has arranged to have some transferred in the event of a conflict. Again, the mere existence of the rumors is useful for Saudi deterrence, regardless of the truth of the matter.

That Tehran takes the Saudi threat seriously is supported by a statement by an Iranian general claiming in September 2018 that Iran had earlier tested its Bavar-373 surface-to-air missile system to intercept a ballistic missile. As the primary threat to Iran from the United States comes from air strikes and cruise missiles, the test is likely aimed at Saudi or Israeli missile capabilities. The Bavar-373 appears to be an attempted domestic copy of the Russian S-300PMU-2 long-range SAM.

Ultimately, Washington clearly has fewer objections to the possession of ballistic missiles and possible nuclear capabilities in its nominal allies. Both Iran and Saudi Arabia, past victims of ballistic missile attack, appear to believe that bulking up on such weapons will deter each other from overt hostilities—perhaps even if they only have conventional warheads. However, the tens of thousands of civilians killed during the War of the Cities in the 1980s doesn’t really support that assumption.