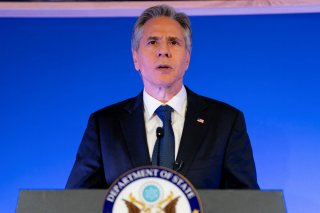 U.S. secretary of state Antony Blinken declared on Monday that the United States had retooled its Sub-Saharan African regional strategy in an attempt to counter increasing Russian and Chinese influence on the continent.

Blinken unveiled the new strategy during a three-nation tour of Africa, which began in South Africa on Monday morning. The secretary’s remarks came during a speech at the University of Pretoria, a prestigious university in one of South Africa’s three capital cities and the headquarters of the country’s executive branch.

The new U.S. strategy, Blinken said, was focused on supporting open African societies, ensuring democratic governance, addressing climate change, and speeding up economic recovery from the Covid-19 pandemic. The secretary emphasized that the strategy was “rooted in the recognition that sub-Saharan Africa is a major geopolitical force—one that has shaped our past, is shaping our present, and will shape our future.”

“The United States will not dictate Africa’s choices, and neither should anyone else,” Blinken said.

Blinken’s visit to Africa comes on the heels of an earlier regional tour by Russian foreign minister Sergey Lavrov, who claimed that the ongoing global food crisis—a crisis significantly affecting several African countries—was the result of Western sanctions on Russia rather than the Kremlin’s destructive invasion of neighboring Ukraine, one of the world’s largest food exporters.

During a joint press conference with South African minister of international relations and cooperation Naledi Pandor, Blinken pushed back on Lavrov’s comments, claiming that Russia’s most significant export to Africa had not been agricultural products, but mercenaries from the Wagner Group, who he said had caused “increased death and destruction in far too many countries.” In his remarks alongside Pandor, Blinken also emphasized the need for multilateral action on the Ukraine issue, claiming that the Russian invasion was “not only an aggression against another country [but] against the foundational principles of the international system” and required an international response—an apparent oblique criticism of the South African government, which has largely remained neutral on the Ukraine issue.

After leaving South Africa, Blinken is scheduled to travel to the Democratic Republic of the Congo and Rwanda before returning to the United States.