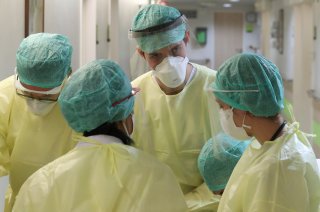 A new study from a top Indian research institute is suggesting that intensive care units (ICU) should get rid of air-conditioning systems to limit the risk of infecting doctors and other frontline workers with the coronavirus.

More than five hundred doctors in India have already died from the virus, and the country itself is the second-hardest hit in the world, with roughly 7.6 million confirmed infections and 116,000 related deaths, according to the latest data from Johns Hopkins University.

“The recirculation of the air by the centralized air-conditioning systems is what has led to the significant infection of our committed medical fraternity and has also led to deaths of doctors and nurses,” the study by the Indian Institute of Science in Bengaluru wrote.

According to the World Health Organization, reducing recirculated air and letting in outdoor air can lower the risk of spreading the virus in indoor spaces. Keeping indoor humidity levels between 40 percent and 60 percent has also been shown to help in curbing airborne transmission.

The study noted that instead of relying on air-conditioning units, ICUs can be fitted with fans that force air inside. Then the exhaust fans pull the potentially infected air and treat it with soap-based air filters or hot water before releasing it outside. The study added that soap proved to be sufficient when confronting H1N1 and Ebola viruses in the past.

“In this case, the fundamental change that we are suggesting for ICUs taking care of COVID-19 or other such contagious patients is that there must be a swift draft of air through the air in a single direction,” the researchers wrote.

“On the entry side of the air, there must be active pushing in of the air with powerful fans. On the exit site of the air, there must be powerful exhaust fans pulling the air out, and we must design in such a way that this air passes through a tube and bubbles through multiple chambers of a solution of simple soap or sodium hypochlorite to assure that any virus in the air gets disintegrated or disinfected by the time the air finally comes out of the multiple bubbling chambers.”

The researchers added that more needs to be done to protect health-care workers and special attention should be given to older doctors who might be more vulnerable if they do get infected.

“The current outbreak has once again made us realize the importance of health care workers as the most valuable resource and it is of utmost priority to provide them effective PPEs as well as a safe and disinfected environment and ensure their security,” the study’s authors wrote.

“We appeal to engineering design researchers to work on an innovative and effective design for a soap-based air filter in order to treat the infected air in ICU and COVID-19 wards.”