Study Suggests Spray From Toilet Has Potential to Spread Coronavirus 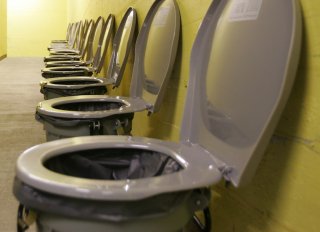 To give you one more reason to put the lid down before you flush, a new study has shown that flushing the toilet can spray coronavirus particles into the air and has the potential to infect others with the contagion.

The study out of Yangzhou University in China utilized computer modeling to reveal that water from a flushed toilet could spray up into the air—sometimes as high as three feet.

“One can foresee that the velocity will be even higher when a toilet is used frequently, such as in the case of a family toilet during a busy time or a public toilet serving a densely populated area,” the study’s coauthor Ji-Xiang Wang, of Yangzhou University, said in a statement.

The findings were published in the journal Physics of Fluids.

The coronavirus is known to be largely spread through droplets produced when an infected person coughs, breathes or sneezes on another individual. Studies, however, have proven that the coronavirus can live and replicate in a person’s digestive system—and evidence of the virus has been pinpointed in human waste.

“Some patients have developed gastrointestinal symptoms such as diarrhea and vomiting, showing that the virus can survive in the digestive tract,” the study said.

“During the flushing process, water enters the bowl from a tank under the action of pressure and mixes with the water seal. This generates turbulent motion, which drives dramatic changes in airflow,” the study added.

Researchers suggested way back in April that toilets might provide an avenue for the coronavirus to spread.

“Already, evidence of SARS-CoV-2 contamination of surface and air samples outside of isolation rooms, and experimental data showing that SARS-CoV-2 can live in aerosols for 3 hours, should raise concerns about this mode of transmission and prompt additional research,” Carmen McDermott, of the University of Washington School of Medicine, and colleagues wrote in the Journal of Hospital Infection.

“Fecal shedding seems to occur in patients without gastrointestinal symptoms, which could enable asymptomatic individuals with no respiratory symptoms to be a source of fecal transmission,” they added.

Another study published in The New England Journal of Medicine in April shared similar concerns.

“Cross-infection usually occurs in family bathrooms and public washrooms. A confirmed case usually remains at home for isolation, where shared use of a bathroom is inevitable. The daily flow of people in a public washroom is stunningly large: thus, a confirmed case may cause a massive number of infections. For these reasons, investigation of toilets in the context of epidemic prevention is imperative,” the study said.