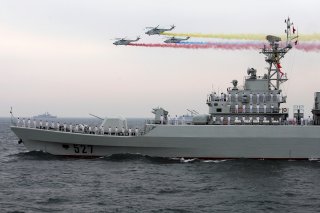 Taiwanese foreign minister Joseph Wu warned on Tuesday that China was using its ongoing military exercises around Taiwan to normalize greater military activity in the Taiwan Strait and make it easier to launch a future invasion of the island, days after the conclusion of Speaker of the House Nancy Pelosi’s visit to Taipei.

Wu claimed during a press conference in the Taiwanese capital that Beijing had used the exercises as part of “its military playbook to prepare for the invasion of Taiwan.” He also observed that a series of drills in the Taiwan Strait were still being conducted as of Monday, even though the Chinese government previously stated that they would finish during the weekend.

Wu added that the large-scale military exercises taking place around the island, as well as the missile launches over Taiwan—the first such launches in China’s history—had been instituted “in order to weaken public morale in Taiwan” along with other measures such as cyberattacks and punitive economic measures.

China announced last week that it would conduct naval exercises in six different areas forming a rough circle around Taiwan. In response to China’s exercises, Taipei arranged and staged its own exercises, preparing a defense against a hypothetical amphibious invasion of the island.

The heightened tensions in the Taiwan Strait came within days of Pelosi’s visit to the island, which occurred over strenuous objections from Beijing and words of caution from President Joe Biden. When she visited in early August, Pelosi became the highest-ranking U.S. government official to visit the island since 1997, when Speaker of the House Newt Gingrich traveled to the island during a tour of East Asia.

Within hours of Pelosi’s arrival in Taipei, Chinese officials initiated military exercises around the island. In the following days, they imposed economic penalties on Taiwanese companies, applied economic sanctions against Pelosi and her family, and indicated that Beijing would decrease its bilateral cooperation with the United States in some areas, including climate.

Taiwan has governed itself since 1949 when the former Kuomintang government of China fled to the island following its loss to the Chinese Communist Party in the country’s civil war. The Communist-led government in Beijing has always regarded Taiwan as a rebellious province and has explicitly stated on many occasions that it would be willing to use force to reintegrate the island into its control if more peaceful methods failed.

Although the United States does not recognize Taiwan as an independent nation, it maintains close political, economic, and military cooperation with Taipei—a source of continued frustration for Beijing.