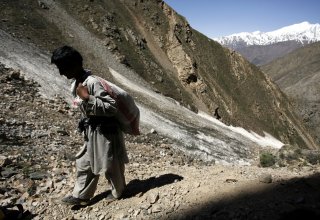 In southern Tajikistan, hundreds of ethnic Tajiks have volunteered to join the anti-Taliban coalition forming in Afghanistan’s Panjshir Valley.

A group of more than 1,800 Tajiks in the southern city of Kulob has volunteered to provide support for the United Resistance Front of Afghanistan, colloquially known as the Panjshir resistance, in its fight against the Taliban, according to a report by Radio Free Europe / Radio Liberty. The group petitioned the country’s president, Emomali Rahmon, for permission to travel south and join the fight.

The Panjshir resistance has maintained control of the valley, making it the only province which has not been taken over by the Taliban. High-level officials in the previous government, including Vice President Amrullah Saleh and Defense Minister Bismillah Khan, have taken refuge in Panjshir, pledging to continue the fight against the Taliban from its sanctuary. Thousands of soldiers from the defunct Afghan National Army have made the same pledge. The valley’s population is predominantly Tajik, while the Taliban are mostly ethnic Pashtuns from the country’s south. While early fighting has taken place between the Taliban and the Panjshir rebels, including skirmishes over the past week that have resulted in hundreds of fatalities, the Taliban have not yet made a serious attempt to capture the province, and some roads to the rest of the country remain open.

The Tajikistani volunteers have not yet received a response, per RFERL. They are almost certain not to gain the approval of Rahmon, as traveling abroad to participate in an armed conflict remains highly illegal under Tajikistani law. However, although the volunteers will not be allowed into Afghanistan, the government of Tajikistan is skeptical of relations with the Taliban, declaring that it would not recognize a Taliban-only government in Afghanistan.

Rahmon made this position clear during a meeting with Pakistani foreign minister Shah Mahmood Qureshi on August 25. In that meeting, Rahmon expressed his disappointment that the Taliban had committed early on to a power-sharing agreement with minority voices in the government, only to ignore it. Rahmon expressed his desire that the Taliban government include more ethnic Tajiks in leadership roles.

Qureshi visited Dushanbe as part of a tour of nations bordering Afghanistan, attempting to convince them to engage with the Taliban government in Kabul. Pakistan enjoys close links to the Taliban, and has been accused of financing it during its twenty-year insurgency against the Afghan government and its international backers.