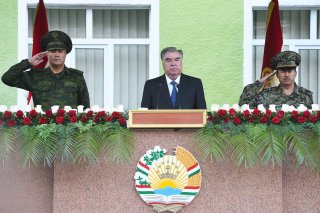 As much of the world has struggled to define its stance regarding the Taliban, which took control of Afghanistan in mid-August, one country has emerged as a clear opponent of the new regime. Tajikistan, which shares its southern border with Afghanistan, has vocally criticized the Taliban’s government and hosted its opponents.

Tajikistan’s autocratic ruler, Emomali Rahmon, has played host to Ahmad Massoud and Amrullah Saleh, the leaders of the “Panjshir resistance” prior to the province’s capture by the Taliban in early September. A third Afghan leader, Abdul Latif Pedram, the leader of Afghanistan’s National Congress Party, has since joined them in Dushanbe, Tajikistan’s capital.

Except for Supreme Leader Ali Khamenei in Iran, Rahmon is the only Central Asian leader bordering Afghanistan who was in power during the Taliban’s earlier five-year rule from 1996 to 2001. During that period, the Taliban supported an Islamist insurgency in Tajikistan, leading Rahmon to lend his support to the “Northern Alliance” anti-Taliban faction, led by Ahmad Shah Massoud, Massoud’s father.

Tajikistan’s objections to the current Taliban government include the potential for it to export radicalism to other countries, as well as the group’s long-time links to the international drug trade.

Another concern for Dushanbe has been refugees, particularly ethnic Tajiks, who have long been discriminated against by the Taliban and other predominantly Pashtun militias. Both Massoud and Saleh are ethnic Tajiks, as are roughly one-fourth of all Afghans and nearly half of Kabul’s residents.

Earlier in September, Rahmon posthumously awarded the elder Massoud Tajikistan’s highest civilian honor for his role in negotiating an end to the country’s 1990s insurgency—a move widely viewed as a message of support for the current resistance movement.

Western observers have highlighted concerns that Rahmon could use the danger of the Taliban to the country’s south to build domestic support —and as an excuse to introduce further counterterrorism measures, strengthening his own power at the expense of Tajikistan’s already-limited political freedoms.

The remnants of the “Panjshir resistance,” however, spoke primarily of freedom within Afghanistan. “Nothing is more important to us than freedom,” Pedram told Financial Times, outlining the group’s plans to announce an opposition movement to the Taliban from exile. He argued that the Taliban had refused to negotiate, giving them no alternative to continued military conflict, and expressed hopes that Russia, which has so far maintained quiet ties with the Taliban, might support the group.