Tajikistan is Still Giving the Taliban the Cold Shoulder. Why? 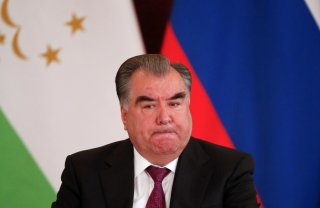 Following the Taliban’s overnight capture of Afghanistan, which largely concluded after the August 15 fall of Kabul, Afghanistan’s neighbors have recognized in practice, if not in principle, that the group is now the de facto government of Afghanistan and must be treated as such for the foreseeable future.

Some of Afghanistan’s neighbors have approached the Taliban with more enthusiasm than others. Pakistan, which openly aligned with the group during the 1990s and has credibly been accused of continuing to support its current iteration, has maintained relatively good relations with the new government. Russia has quietly pursued ties with the group, discouraging domestic criticism; China’s outreach has been more overt, and the Taliban has publicly praised Beijing as a potential trade partner and sent a trade delegation there. In Iran, the state-owned media has spoken positively of the Taliban, and most of the Central Asian countries to Afghanistan’s north have quietly accepted the group’s presence and opened discussions with it.

The exception to this rule has been Tajikistan, whose leader, President Emomali Rahmon, has continued to refuse negotiations with the group and strongly oppose a Taliban-dominated government in Kabul.

Tajikistan shares its southern border with Afghanistan. The two countries share a long history and are closely connected in many ways. The Tajik language is mutually intelligible with Dari, one of Afghanistan’s two national languages; both are linguistic offshoots of Persian. Roughly one-fourth of Afghanistan’s population are ethnic Tajiks, the second-largest group after the country’s dominant Pashtuns.

Of the five Central Asian nations to Afghanistan’s north—Kazakhstan, Uzbekistan, Turkmenistan, Kyrgyzstan, and Tajikistan—Rahmon is the only leader who was in power during the Taliban’s initial conquest of Afghanistan. Rahmon, who took office in the newly created post-Soviet nation in 1994, watched the Taliban’s initial rise to power from 1994 to 1996, and witnessed its five-year war against the “Northern Alliance” rebel movement, led by famed Afghan guerrilla leader Ahmad Shah Massoud, in the country’s north.

During the 1990s, Tajikistan openly opposed the Taliban and aided the Northern Alliance, which included many ethnic Tajiks in its ranks, including Massoud and former President of Afghanistan Burhanuddin Rabbani. In retaliation, the Taliban supported an Islamist insurgency in Tajikistan during the 1990s—an insurgency that Massoud and Rabbani helped to end through negotiating peace talks between the two sides.

Rahmon has given moral support to the “National Resistance Front” in Afghanistan’s Panjshir Valley, and some Tajiks have volunteered to help in the fight there—although reports that the Tajik government had provided military aid were swiftly denied by both sides.