Taliban to Reopen Schools for Girls Next Week 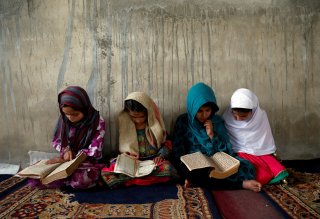 The Taliban announced on Thursday that it would allow girls to return to school next week after Nowruz, the Afghan new year holiday, according to Reuters.

“All schools are going to open to all boys and girls,” Education Ministry spokesman Aziz Ahmad Rayan said, although he later clarified that restrictions would be imposed on girls’ education in accordance with the group’s interpretation of Sharia law. Rayan stated that students would be separated on the basis of gender and female students would only be taught by female teachers whenever possible. He noted that older male teachers would be allowed to teach girls in areas with few or no female teachers, who are in short supply throughout the country.

Rayan stated that education was one of the Taliban’s priorities, claiming that the government had a “responsibility” to ensure that all schools across Afghanistan remained open. “There is no school that will close for this year,” he added.

Girls’ education, a practice that the Taliban explicitly forbade during its rule over Afghanistan from 1996 to 2001, has been a key precondition of Western nations for establishing diplomatic relations with the group. So far, no nation has recognized the “Islamic Emirate of Afghanistan,” even though diplomatic personnel remain on post. Moreover, failing to remedy this situation and others has caused the Taliban to remain sanctioned under international law, complicating foreign investment and the distribution of humanitarian aid.

After the Taliban seized power in Afghanistan in August, its spokesmen promised that the militant group would keep the country at peace and would ensure women’s rights in accordance with Islamic law. At the time, the spokesmen explicitly promised that women would retain their rights to education and employment under the new government, although it later summarily fired nearly all women from government positions and imposed other restrictions on women, including forbidding them from traveling a certain distance without the presence of a male companion.

Although most schools were closed during the Taliban offensive in the spring of 2021 and remained shuttered after the group’s victory, the new government has pushed for their reopening over the past eight months. Many boys’ schools have already reopened, as the Taliban’s restrictions have been far less onerous on male education.