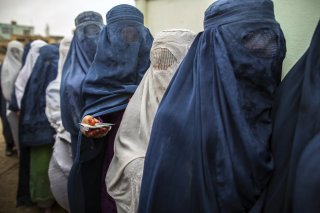 The Taliban-led government of Afghanistan has ordered those women seeking to travel across the country be denied access to road transport without the presence of a close male relative.

The directive was issued on Sunday by the Taliban’s newly established “Ministry for the Promotion of Virtue and Prevention of Vice.” The new department replaced the previous Afghan government’s Ministry of Women’s Affairs.

Ministry spokesman Sadeq Akif Muhajir outlined the decree in a statement, claiming that the restriction would apply for “women traveling for more than 72 km (45 miles).”

Mujahir said that no one should offer these women a ride, although there is no ruling regarding women using their own means of transportation. Women are not officially forbidden from driving in Afghanistan, although few of them own cars or other vehicles.

Also, the new ministry’s directive instructed vehicle owners not to offer rides to women unless they were wearing a hijab. The ruling did not specify what is meant by “hijab,” which has been variously defined by different Taliban leaders as any garment from a simple headscarf to a full-body covering.

Separately, the ruling indicated that drivers should not play music in their vehicles. This restriction is a throwback to the group’s last period of rule from 1996 to 2001, during which music was regarded as un-Islamic and outlawed throughout the country.

Although Taliban spokesmen promised that the group would continue to respect women’s rights in the days following the group’s seizure of power in August, its track record in power has been far more dubious, with mass firings of female public-sector employees and continued widespread lack of access to girls’ secondary education. A recent report conducted by Reporters Without Borders revealed that more than 80 percent of female journalists in Afghanistan have stopped working since the Taliban takeover, compared to 43 percent of journalists overall.

The ruling “shuts off opportunities for them to be able to move about freely, to travel to another city, to do business, [or] to flee if they are facing violence in the home,” Barr told the Agence France-Presse news agency.

In early December, Emir Mullah Hibatullah Akhundzada, the leader of the Taliban, issued a decree ostensibly protecting women’s rights. Although it banned forced marriages and claimed that women should be “equal” to men before the law, the decree did not offer any concrete protections to women, allowing for further restrictions to be placed on their education, employment, and travel.