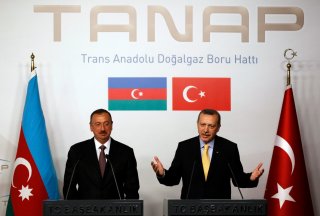 When Azerbaijan invaded and occupied the Armenian enclave Artsakh (Nagorno-Karabakh) in September last year, many were quick to note the failure of global leaders—particularly Europe—to condemn the regime’s aggression.

Though it has been suggested the Covid-19 pandemic and U.S. elections played a role in distracting attention from Azerbaijan’s aggression, willful ignorance alone cannot explain the extent to which global leaders abrogated their responsibility to ensure the protection of fundamental human rights.

In reality, global silence stemmed from an all-too-familiar concern—energy security.

With Europe seeking to diversify its energy supply to decrease dependency on Russia, many saw in the resource-rich Azerbaijan a new hope for European energy security.

That hope was seemingly fulfilled when Azerbaijan’s Southern Gas Corridor (SGC) began pumping natural gas from the Shah Deniz gas fields across Turkey to the Adriatic on December 31.

But with this new pipeline comes the dawn of a new European dependency crisis; shifting its reliance from one expansionist authoritarian regime to two others—Turkey and Azerbaijan.

While Turkey and Azerbaijan were once seen as stalwart friends of Europe and the West, it has become clear over the course of the last decade that neither are reliable nor good faith partners in Europe’s quest for energy security.

Turkey has proved more than willing to use the leverage it already holds over Europe to extract favorable political concessions. It has cynically used the lives of refugees as a bargaining chip to extort Europe and has leveraged its NATO status to get away with interventions in Syria, Iraq, Libya, and menace the Mediterranean.

Turkey has simultaneously been deepening ties with Russia. Contrary to expectations that great power competition would see Turkey act as the West’s bulwark against Russia, the two have proven capable of cooperating where mutually beneficial to undercut U.S. and European influence.

Not only has this characterized Russia-Turkey relations with regards to Syria and Libya, but it has also extended to the field of energy, with the TurkStream natural gas pipeline being a key example.

In fact, the TurkStream pipeline began pumping Russian natural gas through Turkey into the Balkans a day before Azerbaijan’s Southern Gas Corridor opened.

This is no coincidence. Turkey has long been an ally for both NATO and Europe out of mutual necessity. In Turkey, the Western bloc saw a means of containing Russia. In the West and NATO, Turkey found a vehicle for restoring regional hegemony.

What began with the illegal invasion and occupation of Cyprus in 1974 has intensified under the Presidency of Recep Tayyip Erdogan, who has dropped any pretense of lip service to European multilateralism in exchange for seeking the expansion of Turkey’s domain.

And energy has become one of the many frontiers through which Turkey has sought to achieve that; fostering Europe's dependency in collusion with Russia to strengthen its geopolitical influence in the region-at-large.

And its overt support for Azerbaijan during its invasion and occupation of Artsakh was a successful proof of concept.

This should not have come as a surprise to Europe. Azerbaijan and Turkey have long seen each other as brotherly nations with shared expansionist pan-Turkic aspirations.

Azerbaijan had been the chief spoiler of the OSCE-backed conflict resolution process for decades, regularly violating the ceasefire while institutionalizing anti-Armenian sentiment domestically to prepare its population for war.

Turkey, in its quest for regional dominance, had long been seeking an angle to insert itself into Azerbaijan’s war to establish its foothold in the region. This opportunity arose out of the complete impunity Ankara had been afforded over its consistent regional adventurism. It would go on to transfer ISIS-linked Syrian mercenaries, deploy its F-16s, and ultimately—with Moscow’s consent—establish a semi-permanent military presence in Azerbaijan.

The failure over the course of decades to contain both Turkey and Azerbaijan’s regional aggression undeniably emboldened both Baku and Ankara.

Turkey and Azerbaijan were not the only big winners. Russia, in sending thousands of peacekeepers to the region, has also established a semi-permanent military presence in Azerbaijan; and in doing so has sought to counter Europe’s quest for energy diversification.

As such, while Azerbaijan was once seen as capable of pursuing a foreign policy largely independent of the region’s three major powers, Russia and Turkey’s looming presence has put an end to that assumption.

The recent war has left Europe in a precarious position. Its prolonged silence on Turkish aggression has in fact accentuated its dependency crisis; allowing its regional competitors to unite forces on energy trade, and work with each other to expel European influence from the South Caucasus by monopolizing the terms of the recent ceasefire agreement.

In the process, its leaders have also forsaken the principles of democracy and human rights institutions such as the EU—and NATO—are meant to uphold. This is in many ways unsurprising, particularly given the democratic backsliding in Europe itself—which Turkey has taken advantage of.

Similarly, Europe’s inaction has set a precedent that will ensure Turkey’s continued recourse to aggression as a means of securing its geopolitical interests, while legitimizing the genocidal narratives propounded by both the Turkish and Azerbaijani regimes prior to, during, and after the war.

For Europe to challenge the emerging Moscow-Ankara axis, it must be prepared to uphold rule-based order in the region; one that advances democratic values, and multilateralism. One means of achieving this would be to spearhead a status-determination process for Artsakh that would see its right to self-determination upheld.

Both the United States and Europe played an integral role in the status-determination process for Kosovo—through the United Nations, OSCE, the EU’s Rule of Law Mission in Kosovo (EULEX), and ultimately recognition—setting a legal precedent for remedial secession.

Not only would this provide an opportunity for European powers to push back against Russian and Turkish influence, but it would also be an important step towards repairing trust in multilateral institutions of democracy and human rights thoroughly undermined by autocratic forces both within and without.

Allowing Azerbaijan’s aggression to go unanswered while granting Russia and Turkey the opportunity to continue monopolizing the region’s energy supply without consequence risks more than just Europe’s energy security—it marks the capitulation of Western democracy to regional authoritarianism. Europe—and the United States—can no longer afford to sit on the sidelines.

Alex Galitsky is Communications Director of the Armenian National Committee of America—Western Region, the largest grassroots Armenian advocacy organization in the United States. His works have previously been featured in The Jerusalem Post, Haaretz, The Hill, The Los Angeles Times, and the Washington Examiner.