Ukraine and Russia Accuse Each Other of Violating Ceasefires for Evacuation 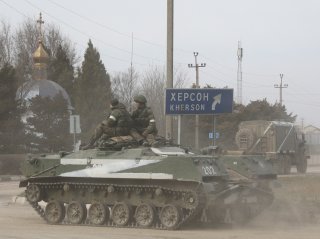 As Russia and Ukraine traded accusations over failed evacuation attempts, a humanitarian catastrophe continues to unfold in Mariupol.

Another attempt to evacuate civilians from the besieged southeastern port city of Mariupol collapsed on Sunday, as Ukrainian officials accused the Russian military of violating the terms of a ceasefire with a new round of shelling.

"There can be no 'green corridors' because only the sick brain of the Russians decides when to start shooting and at whom," said Ukrainian interior ministry adviser Anton Gerashchenko.

The failure of the evacuation corridor comes on the heels of Ukrainian allegations that Russian forces violated a prior ceasefire and evacuation agreement on Saturday with further artillery strikes.

The Russian side claims the evacuation process is being obstructed by local Ukrainian ultranationalist groups and bad-faith behavior from Kiev.

"In Mariupol, neo-Nazis of the territorial defense battalions are again using terrorists’ tactics of combat operations,” Russia’s defense management center said, according to Russian state-backed news outlet TASS. “They use civilians as a human shield and deploy heavy weapons in residential compounds and keep residents inside by force."

"According to available information, nationalists are also barring civilians, including foreigners, from leaving, first of all, blockaded populated localities,” Mizintsev said. “We have this reliable information, primarily, concerning Kiev, Kharkov, Mariupol along with a number of other inhabited localities,"

The defense management center made the same claim on Sunday. It also claimed that Ukrainian forces opened fire on Russian forces at the time agreed for an evacuation.

"Moreover, Ukraine’s authorities used internet resources and television to misinform Mariupol residents about the postponement of the evacuation due to the Russian side’s alleged failure to observe the ceasefire,” the defense management center said, according to TASS. “It is an total lie and betrayal of own people.”

Dominik Stillhart, director of operations for the International Committee of the Red Cross (ICRC), told the BBC on Monday that an evacuation route offered to Ukrainians was mined.

"We have a team on Mariupol on the ground," Stillhart said. "They were ready yesterday despite the fact that it was not entirely clear what exactly the agreement was. And as soon as they reached the first checkpoints, they realized that the road that was indicated to them was actually mined. So therefore, the agreement couldn't be implemented.”

Russian and Ukrainian negotiators appeared to agree in principle on the need for “humanitarian corridors” during a recent round of talks, but Stillhart said that the two sides have yet to iron out a concrete agreement on how evacuation routes out of Mariupol should be enforced.