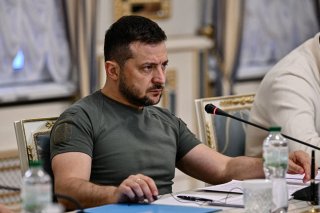 The Security Service of Ukraine (SBU) has published a list of sixteen “collaborators” accused of  organizing referendums on accession to Russia in parts of occupied southern and eastern Ukraine.

SBU investigators suspect these persons under the “collaboration activities” article in Ukraine’s criminal code. “In particular, it was established that these collaborators, with the support of the armed forces of the Russian Federation and representatives of the aggressor state, carried out a series of actions to prepare and organize an illegal referendum.”

Four Russian-occupied regions—Zaporizhzhya, Kherson, Donetsk, and Luhansk—voted to join the Russian Federation earlier this week in a series of referendums dismissed as a “sham” by Ukraine and the West. Presidential advisor Mikhailo Podolyak said Ukrainian citizens who helped organize the referendums in occupied Ukraine would be held criminally liable. However, Ukrainians who were forced to participate in the voting will not face charges.The sixteen individuals named by the SBU are accused of forming election commissions, producing and delivering ballots to polling stations, and other activities directly related to planning and executing the referendums.

“The Security Service emphasizes the inevitability of punishment for crimes against the national security of Ukraine,” the SBU added. “The pre-trial investigation is carried out by SBU investigators in Zaporizhzhia and Kherson, Donetsk and Luhansk regions under the guidance of the regional prosecutor’s offices.”

Ukrainian president Volodymyr Zelenskyy has repeatedly stated that Ukrainian forces will work to root out collaborators in settlements recaptured from Russia and in territories that have remained under Ukrainian control. Moscow-installed officials in southern-southeastern Ukraine have reportedly faced a steady stream of assassination attempts, including bombings and shootings. According to Russian media outlet RIA Novosti, Oleg Boyko, deputy head of the Berdyansk military-civilian administration for housing and communal services, was killed near his garage along with his wife and local official Lyudmila earlier this month. In August, the Ukrainian media reported that Vladimir Saldo was hospitalized following a suspected poisoning attempt; he returned to Kherson the following month. “As soon as the city falls asleep, the partisans wake up,” wrote Podolyak on Twitter. “We wish all the collaborators a ‘good night.’”