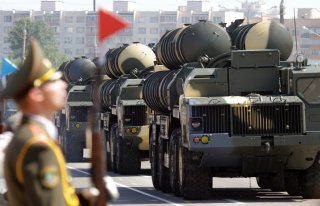 The Pentagon is working with allies to sustain and replenish Ukraine’s air defense systems, which continue to ensure contested skies above the warzone despite Russia’s apparent numerical superiority in the air.

“We still assess that … they have the majority of their air defense, long-range air defense systems available to them. Yes, they're using them, of course, and we are working hard with allies and partners to help replenish those stocks. But they are using them quite effectively, and as I said earlier, the airspace remains contested,” a senior Pentagon official told reporters on Monday.

While Ukraine’s existing air defenses are older, Soviet-made systems, they are being effectively used in ways that have surprised observers. “It's remarkable what the Ukrainians have been able to do with the air defense systems that they have available to them, and that's why we're going to try to replenish them as best we can,” the senior Pentagon official acknowledged.

While the reasons why Russia has yet to establish air superiority aren’t fully known, Ukrainian targeting tactics and battlefield resolve have significantly impacted the attempted Russian air attacks. “The Russians have surface-to-air missile coverage almost all over the entire country. Their pilots are still showing risk-averse behavior … if they have to venture into Ukrainian airspace, [they are] only doing it for a short amount of time before they leave,” the official said on Monday.

One possible way to ensure that Ukraine continues to threaten Russian aircraft would be to provide Russian-built S-300 air defenses to Ukraine. It is unclear if this is still under consideration or if it may already be happening. Specific, sensitive details may be difficult to learn, particularly when it comes to the possibility of Russian fighter jets being downed by air defenses. However, whatever Ukraine is doing to shoot down and stop Russian air attacks appears to be working.

Mobile Russian-built air defenses are increasingly capable of networking with one another with high-speed computers and digital processors. They are also increasingly able to simultaneously track aircraft with multiple frequency bands, which increases their versatility and “detection envelope.” Will Western powers provide Ukraine with additional Russian-made air defenses? It certainly may be possible, as there have been reports that countries such as Slovakia are considering providing Ukraine with more S-300 systems. Whatever the case may be, the Pentagon is being very clear not to speak for any other countries or interfere with ongoing plans.