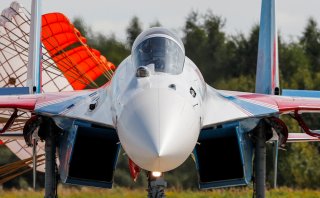 The absence of stealth aircraft appears to be a particularly impactful dynamic in the ongoing war between Russia and Ukraine, given that advanced air defenses have made it possible to close large swaths of the sky to attacking aircraft. An effective fifth-generation stealth fighter would quite likely be able to find and destroy enemy air defense systems, something that fourth-generation aircraft seem to have been unable to do.

“The Russians have about a four to one advantage over the Ukrainian Air Force. Most people thought that the Russians would roll over the Ukrainians very quickly. Clearly, that has not happened,” Lt. Gen. David Deptula (Ret.), Dean of the Mitchell Institute for Aerospace Studies, told the National Interest in an interview. Deptula said that this can be attributed to “a combination of the incompetency of the Russian military [and] the tenacity of the Ukrainian forces.” “I think the resolve of Ukraine has surprised virtually everyone, but especially Vladimir Putin,” Deptula added.

Ukraine’s effective use of air defenses may be a key reason why Russia has not yet been able to secure the skies above Ukraine.

“Their air defenses are working, and this once again reiterates the importance of being able to resupply them as time goes on. Neither side has air superiority ... so [it] is contested airspace. But one of the ways to enhance the probability that Ukraine can survive the assault of Putin’s military is by ensuring that they have sufficient forces to sustain their air defenses from the ground as well as their air force,” Deptula added.

While making a point to avoid specifics regarding the particular systems being sent to Ukraine, Pentagon spokesman John Kirby has been clear that Kyiv has been receiving air defenses from its Western partners. If used correctly, well-placed mobile air defenses could, in effect, prevent Russian fighters from flying in areas within range of Ukrainian surface-to-air missiles.

This dynamic is likely compounded by the fact that Russia only operates around twelve Su-57 5th-generation stealth fighters, with plans to acquire around seventy more in the coming years. Even if all of the Su-57s were currently deployable, they would still likely not be enough to stop modern air defenses from shutting down the airspace. Russia’s fourth-generation jets, such as the Su-34 and Su-30 fighters, do not appear to be stealthy enough to avoid being targeted by the most advanced air defenses.

As for whether Ukraine can hold on, that may depend on how quickly weapons, supplies, and ammunition can arrive in Ukraine to support the fight against Russia. “It's probably a 50-50 chance on whether the Ukrainians can hold them off,” Deptula said.