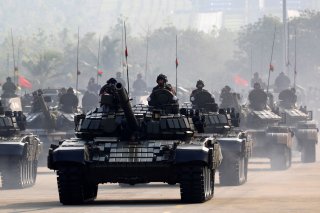 Tom Andrews, the United Nations special rapporteur on human rights in Myanmar (Burma), claimed during a meeting of the UN Human Rights Council in Geneva on Wednesday that conditions in the country had gone from “bad to worse to horrific” since the military’s seizure of power in February 2021.

Andrews also criticized the UN’s response to the coup and the Burmese military junta’s ensuing human rights abuses, arguing that the international community had “failed” in its efforts to prevent war crimes and crimes against humanity in Myanmar. The UN official’s comments came less than a day after reports emerged detailing the Burmese military’s bombing of a school in the country’s northern Sagaing province, killing at least eleven children.

In the days after the military coup, millions of Burmese citizens began a series of street protests against the junta of Gen. Min Aung Hlaing, the country’s former commander-in-chief, calling for the return of power to civilian leaders and the release of State Counsellor Aung San Suu Kyi, the former government’s de facto leader. The Burmese military cracked down on the protests, leading to more than 2,300 deaths and tens of thousands of arrests. However, the crackdown prompted many of the peaceful protesters to take up arms, breathing new life into the country’s decades-old peripheral civil war.

Andrews added during his report that nearly 300 children remained imprisoned by the military junta, while eighty-four other political prisoners had been sentenced to execution. Four Burmese human rights activists, including a lawmaker under the previous parliament, were executed in July, prompting international outrage; a spokesman for the junta was unrepentant, claiming that the four had “deserved it.”

In response to these incidents, Andrews argued that the UN and Western governments should take “stronger, more effective action to deprive the junta and its forces of revenue, weapons, and legitimacy.” He emphasized the key role that the Association of Southeast Asian Nations (ASEAN), a regional bloc including Myanmar, would play in de-escalating the violence and overseeing a potential return to civilian rule, but noted that the organization’s previous outreach to the junta—including through a “five-point consensus” regarding steps to improve conditions in the country—had been ignored.

Earlier in the week, the director of the UN’s Independent Investigative Mechanism for Myanmar (IIMM) also warned the council that the scope of human rights violations in Myanmar had “broadened dramatically” since the beginning of the year.